Apple iPhone- Trends and Stats for 2022

The iPhone often feels like it is something entirely different from the rest of the smartphone conversation. There is always a competition with it, and there are people who are loyal to Apple products alone. You might see people loyal to Android phones, but rarely any particular brand or model type of them. Further still, Apple has been expanding its services and options to ensure those iPhone users have everything they might want from a smartphone. Whether it's music, movies, or a video calling app, Apple has its customers covered.

Yet the tech world is constantly changing, and Apple is an adaptive company. What is Apple able to do with its iPhone, where does it stand, and what do current developments mean for you as a consumer or potential consumer of their smartphones? There’s a lot to dive into, and there are many things we still do not know or even Apple does not know.

We know that you have a lot of questions (as do we), so here is as much information as we can provide on the topic of the iPhone in 2022:

Simple by design and monolithic in its importance to the smartphone industry, there is quite nothing like this series of smartphones. But what can we learn about it over the years? It’s not magical, and we can certainly study it like any other product. Here are a few things you should know:

In terms of total units sold, the number of Android phones out there vastly outstrips the number of iPhones. But that isn’t necessarily the only way to look at it. If you look at the top selling phones overall, you will see that the iPhone is popular in sales.

Here are the top selling phone brands as of early 2022:

The only close competitors might be Samsung, which is a giant in the electronics world overall, and Xiaomi, which has a huge advantage in China, which has an immense user base. Given that Apple is focused on the United States, which doesn’t have so many people, it does extremely well.

Some other important facts about iPhone sales: 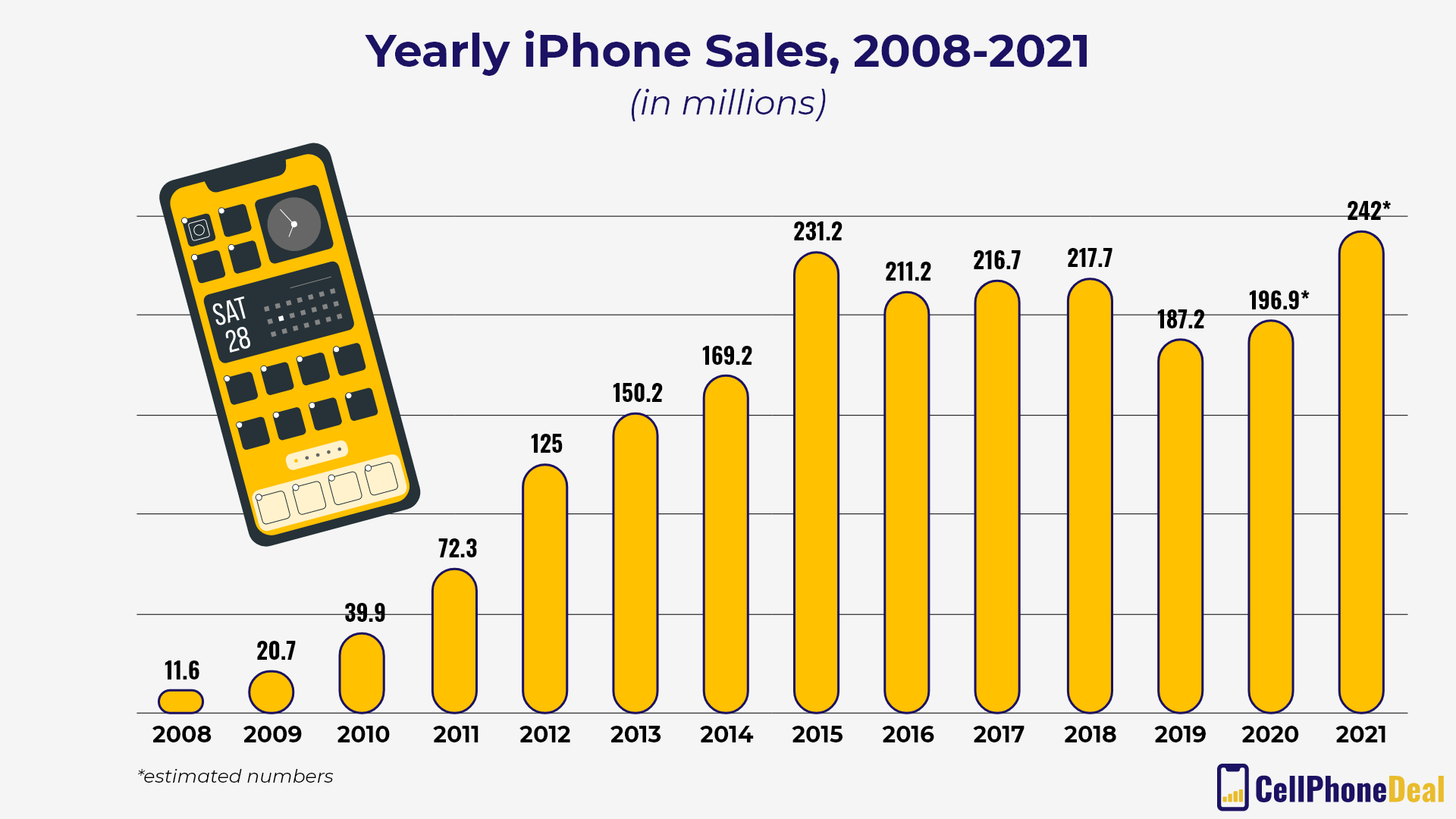 Despite being a worldwide phenomenon and likely the best-selling line of phones of all time, the iPhone isn’t available everywhere. The first iPhone was originally only available in the United States and a handful of European countries. This later expanded into a much wider spread after the iPhone 3G version came out, including all the countries we now know the iPhone as being popular in.

However, while the iPhone is available in these countries, its true dominance lies in the United States, which is why we might focus on there a lot more than we normally would in this post.

There have been more than a dozen main iterations of the iPhone, and plenty of submodels within those iterations. Which ones did the best and which ones did people flock to? If there was a particularly popular model, why? 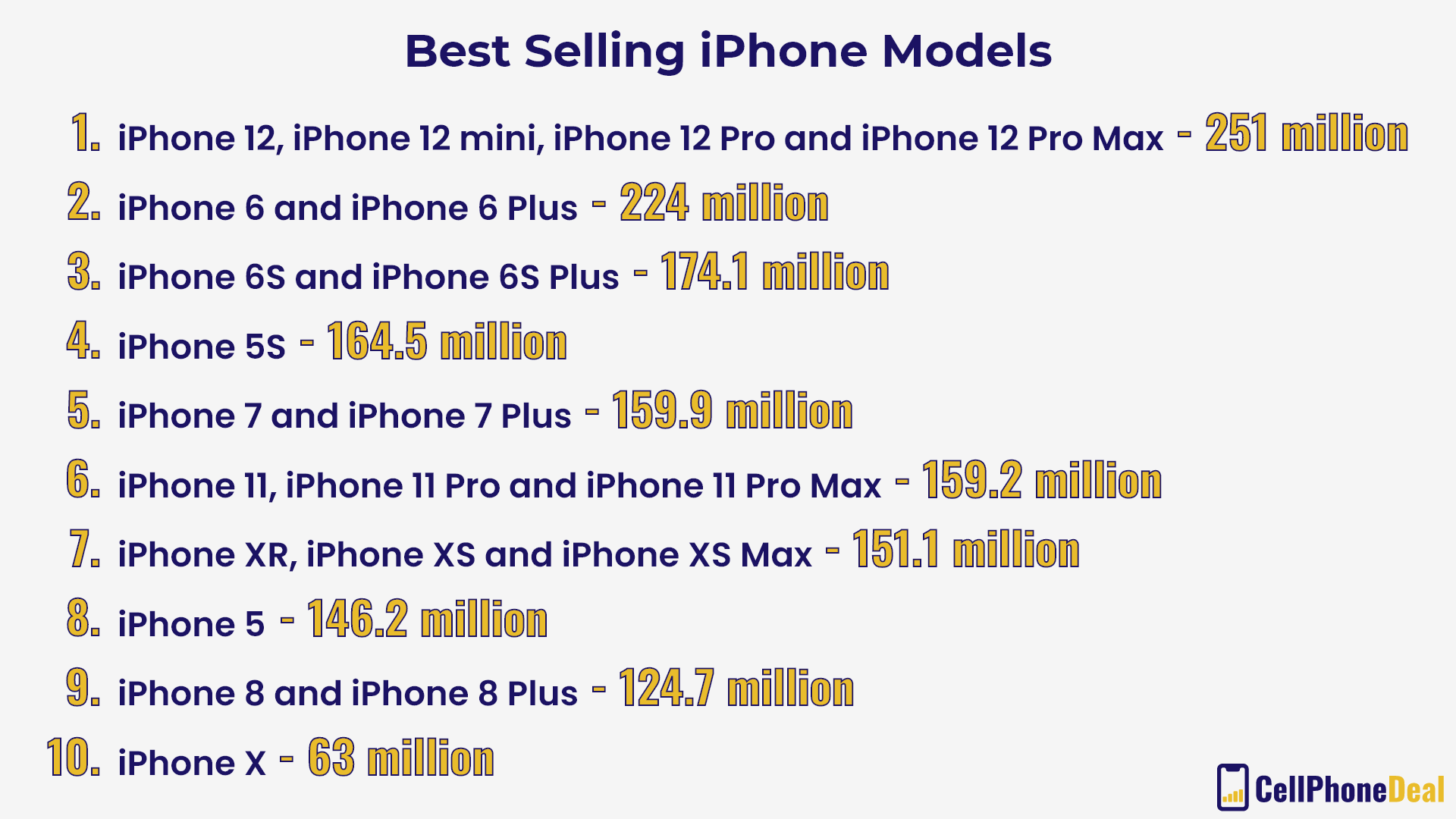 In some cases, the more recent models will have an advantage, as there are more buyers and Apple has a larger loyal consumer base the more recent you get. However, the iPhone 6 line and the iPhone 6S like were particularly popular. This was because there were larger screen options compared to the iPhones of the past. It was a huge display improvement, and people noticed. And compared with other models the 6 and 6S were a huge improvement over previous designs. People went out of their way to get an iPhone 6. The others were sold as people needed to upgrade.

It should be noted that the sales numbers for the last couple of models might not be complete, as there is still more time left before they cease production and are hard to find in stores. Even the iPhone 12 today still sells some units, and price might become a more important point than performance as performance improves and prices increase.

Apple as a Company

Without the apps that make our daily lives easier and more entertaining, the iPhone would mostly just be a somewhat nice piece of hardware that can make phone calls. Apps add character to our phones, and the app store is a portal to a multitude of other worlds and use cases for your iPhone. Here are some statistics and facts you should be aware of regarding them:

Talking about smartphone apps could warrant its own nearly endless series of articles. We encourage you to look into the topic more and that you try to learn more about the apps installed on your phone right now.

What Is Next for Apple?

If other tech companies are anything to go by, we will likely see an increased investment in services with the home to not only integrate more people into the grand infrastructure of the company but gain more revenue in the process. To keep growing, the company will need to consider how to get more from the customers it already has, and it will need to offer more to customers to do so.

What does this mean? We are likely to see an increase in investment in wearables. Once everyone that is going to get an iPhone has an iPhone, then peripherals and extra services where will be what Apple has to rely on to grow (and as a company, it wants to grow). We could see an expansion of Apple Music or other services, to the extent that Apple is able. Apple has gotten into mobile gaming more with Apple Arcade, though it has been relatively quiet as of late. 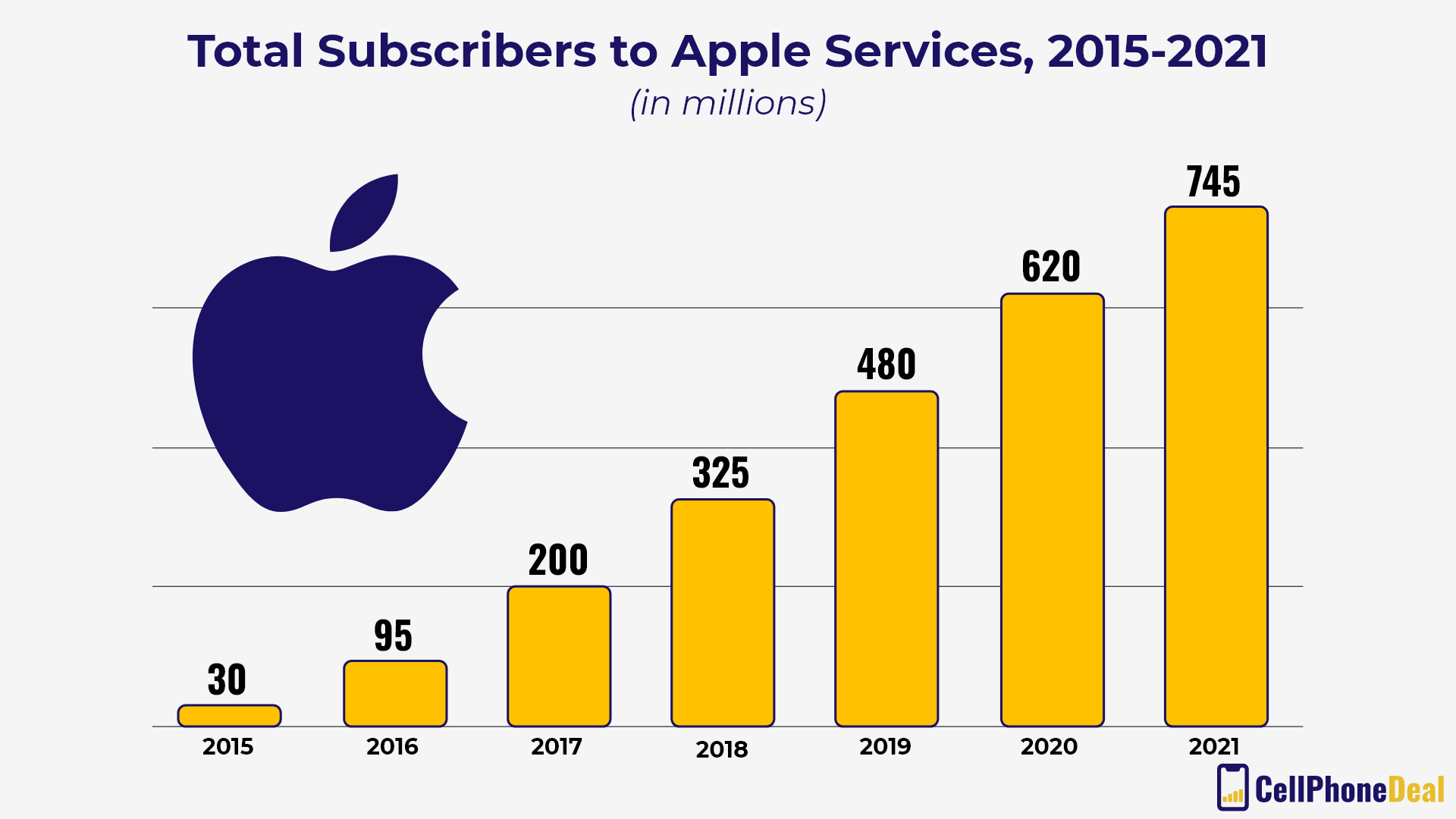 Among Apple’s various services, we have seen a great increase in the number of subscribers. We will likely see an increase to 1 billion total users by 2025, and this could increase even more if Apple unveils a new service in the coming years. Given that smartphones in general can do more than ever before, we are likely to see something.

Other companies such as Google and Amazon have long spent a fair amount of money trying to create either the next big thing or experimental technology. Remember Google Glass? That was one of those projects, as ill-fated as it was. Apple has been somewhat different in that they’ve been more conservative, focusing on their major departments and products and not much else. They are quite willing to discontinue a product after a time. Apple wants customers focused on what it wants, not the other way around.

And what are customers looking for? At the moment, nothing in particular, or that their preferences will change like the wind. They will always be looking for improved versions of what they already use, and things such as better screen resolution or a better camera will always be received well. There are other factors such as better connections and internet speed, but that is out of the hands of Apple and more in the hands of service providers.

The iPhone is a dominant force in the smartphone industry, especially in the United States. There’s a lot to learn about them and a lot of handy information you can use to better your own experience. We hope that you know more about the iPhone you might own and have a better idea of whether the company and products are something personally worth following. We welcome you to come back to this article as you feel the need and that you try to learn more if you have any questions. We wish you a great time with your phone (iPhone or not) and that you keep exploring what these devices can do and the impact they have!