Buying a Used Cell Phone: The Tips and Tricks You Need to Know

If you’re reading this, you might be in the process of buying a new phone. Alternatively, you might be in the market for a new phone and are wondering if you can save money by making your “new” phone a used one. And you can. But like most deals and opportunities for savings, there are hangups and potential risks that you need to work around. Nothing is free, and a used phone is not the best choice for everyone.

Therefore, we wanted to create a guide to help you, whether you know you want a used phone or are on the fence. Here is what you need to know when buying and setting up a used phone: 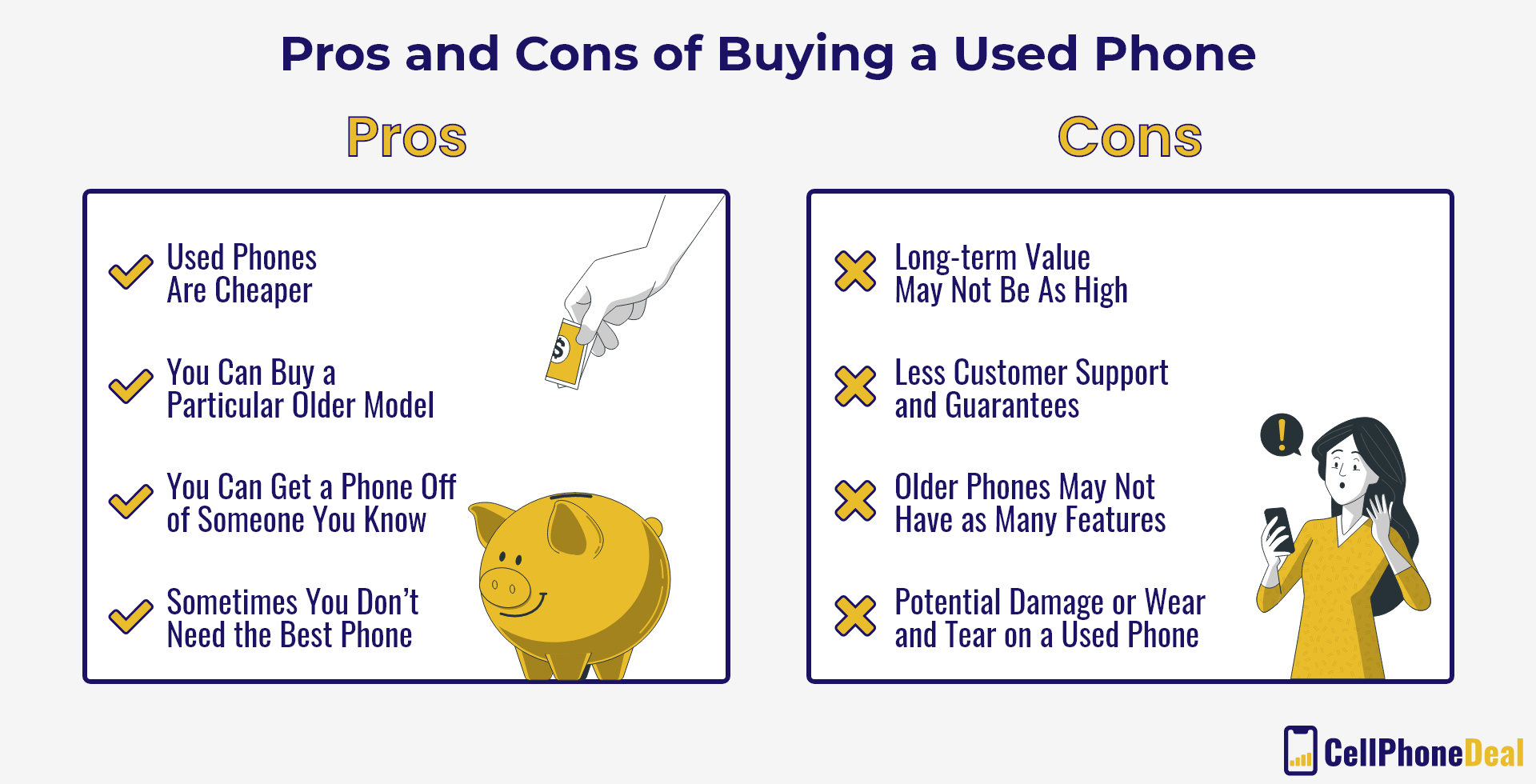 Why Might You Want to Buy a Used Cell Phone?

Let’s go over the pros and reasons you’re even considering buying a used phone in the first place.

Used smartphones are not for everyone. In fact, we’re confident that most people won’t be entirely happy with a used phone. Here are the major reasons why:

When shopping for a phone online, you might see both phones that are “used” and others that are “refurbished.” You will want to treat these two categories the same in many ways, but they are still quite different in terms of what to expect.

A refurbished phone is a mobile phone that was returned for whatever reason (perhaps an error or just a return) and then repaired and looked over by an expert. It is fixed if needed, set back to its factory settings as though it was new, certified, and then repackaged. It’s usually the closest thing a phone will get to new without being new. While they can have problems, a refurbished device generally comes with a better warranty and return policy.

A used phone is what you would expect. A phone that another person has used for some time. It could mean that it was used for a few days or that someone regularly used it for a year. Both are used phones, and quality is not so guaranteed.

A refurbished phone can be used and was likely used to some extent. A used phone does not have to go through the refurbishing process. Outside of a cursory check by the seller, you are getting what the previous owner left off. Keep these things in mind when you are shopping for phones.

You will be looking at phones soon enough, but one of the first choices you should make outside of new or used (maybe you haven’t decided yet, and that’s fine) is where to look for phones. After all, the stock will vary by location, as will the prices and policies. To help you, let’s go over the major options:

You may find additional opportunities or places to buy a used phone. Whatever your instance, follow the general principles and ideas mentioned in this guide, and use your better judgment. It is generally better to be cautious than aggressive when picking out a device that will be by your side constantly for several years to come.

How Much Should You Pay?

It would be best if you were looking for a significant discount on the phone; otherwise, the risks and inconveniences of getting a used phone far outweigh the savings, no matter the phone.

However, the exact discount you can expect is based on two things: the condition of the phone and how old the phone model is. If the phone’s condition is poor, you shouldn’t be paying much for it if you’re still interested in it. And the older the phone model, the better the discount should be. A new phone model that came out three months ago is probably used only for a little bit before a return or upon the realization that the buyer made a mistake.

We cannot tell you the market rate for every phone. There are too many phones to go over, and the rates will likely change when you read this article. However, you can compare the shop with other sellers for phones of the same model in the same relative condition.

Also, haggling down the price is not recommended. You will not be able to do so with most retailers. And with individual sellers, as much as we advise against them, the trouble is usually not worth it.

Inspecting a Phone Before You Buy

Inspecting the phone is the of the best ways to assure you make the right choice before you hand over your credit card details.

The phone should start up as though it was new, and you shouldn’t notice anything wrong with it unless it was clearly stated and agreed that it was acceptable for the discounted rate. Unfortunately, different sellers have different definitions of “acceptable,” which puts the task of checking it to your satisfaction on you.

If you are ordering the phone online, you can still properly inspect it after you buy it while giving yourself enough time to make a return if you want to.

Your inspection should include, if possible: 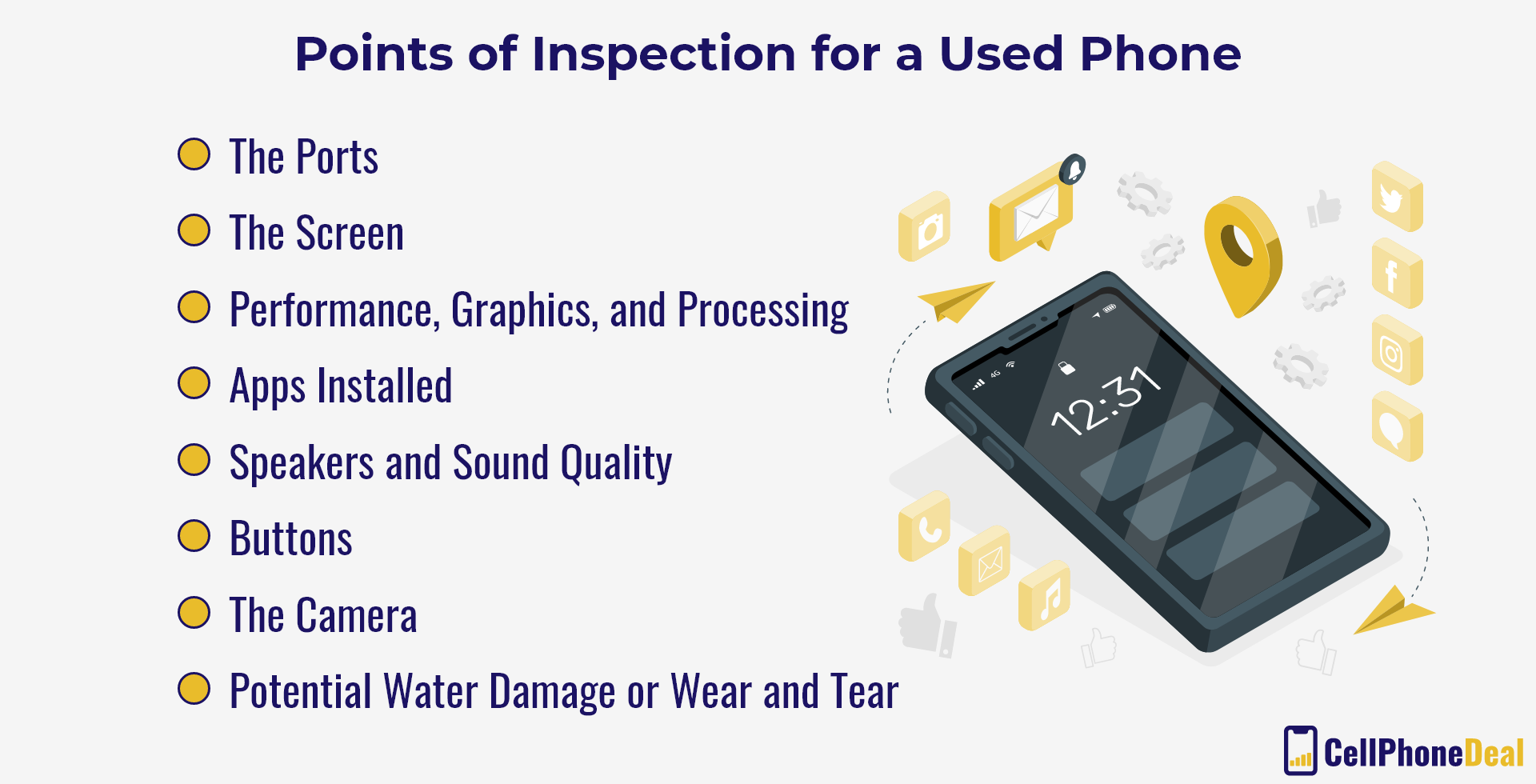 We understand that some of these checks cannot be done quickly or within a few minutes. However, do what you can and prepare to return the phone later if you find issues that make the device unacceptable to you.

If, upon inspection, you find an issue that is not mentioned in the listing or the seller didn’t bring it up already, it is time to bring it up. You might get a further discount on the phone, or it might result in you being uninterested in the phone overall.

Make Sure the Phone Is Compatible with Your Carrier and Setup

It would be a problem if you bought a used phone only to find out it isn’t compatible with your mobile service provider. Yet such events do occur, and you want to avoid them. You should be able to quickly check online whether a phone is compatible, either with your carrier or using a general site that keeps track of such things.

Before spending money on the phone, you will also want to ensure the phone isn’t locked to a particular provider (or at least it works with your provider). If you buy from a retailer, it should be labeled as such, and you will likely get an unlocked phone.

This should be a quick step and not your primary concern.

Trading in Your Old Smartphone

Chances are, when you are looking for a new (or used smartphone), you have an old smartphone. It is up to you whether you want to do this or not, but we would recommend against it unless you would get a good return. Having a backup device, even one without wireless service, can be helpful. Additionally, a lot of your personal data is held on your smartphone, so at least make sure to wipe it or reset it before turning it in.

Essentially, if you are going to get less than $100 for your old smartphone, it isn’t worth it. The device is best used by you for another purpose or handed off to a family member or friend in greater need. You can also look up how much your smartphone is worth to ensure you’re not getting the wrong end of a deal.

Make Sure It Isn’t Stolen

This likely will not be an issue if you are buying through a reputable phone dealer or good online marketplace, but stolen phones are often sold, and you don’t want to be caught in the middle of a problem or feel the guilt of buying fenced goods.

What you will want to do is check the ESN online. There are tools online you can search for to do so. Swappa has a great tool for this and includes instructions on finding your IMEI for checking.

And as always, your impressions and gut feelings should be listened to. At the same time, they shouldn’t be the only thing driving your decision-making; back out if you feel uncomfortable with a potential deal. There will be other smartphones.

So you’ve bought a used cell phone. Congratulations, but you might be wondering what you should be doing next. For the most part, a lot of the setup and getting started will be much like starting up a new phone. There will be personalization and some tinkering, but that is at your discretion. Of course, there might be variations depending on the phone and your carrier, but nothing that a tiny bit of research cannot overcome.

Some steps you should take include:

Buying a used phone for yourself or someone else can be scary, and you might not know what you are getting until you use it regularly. Yet using some of the above strategies, you will better handle what you should and should not buy. Additionally, you should better understand who to buy a phone from.

We hope that whether in the end, you decide to buy a used cell phone or not, you have an idea of what to expect from both the phone and the process and that these tips and tricks help you. Make sure to protect your interests, and we wish you the best of luck in your search for your next phone.