Cell Phone Addiction: What Are the Signs and Symptoms?

Cell phones and smartphones are some of the handiest, most entertaining, and most life-changing devices we have ever envisioned. Many of the electronics and devices of the past several decades have effectively been rolled into them, and at this point, there is little information they cannot access and little they cannot do in general. Have an electronic need? It’s right in your pocket.

Yet with such handiness, there is a bit of a darker side to them. People are often glued to their screens so much that they ignore the world around them. And while some say it’s just teens, it’s been teens for about a decade now, and those teens grew up. In truth, people of all ages deal with cell phone addiction, and it can be a serious matter. It deserves more attention, and researchers and even governments are realizing this (some faster than others).

On a personal level, awareness is key, as is knowledge of your own phone habits. Here are some of the common signs and symptoms of cell phone addiction, and what you can potentially do about it: 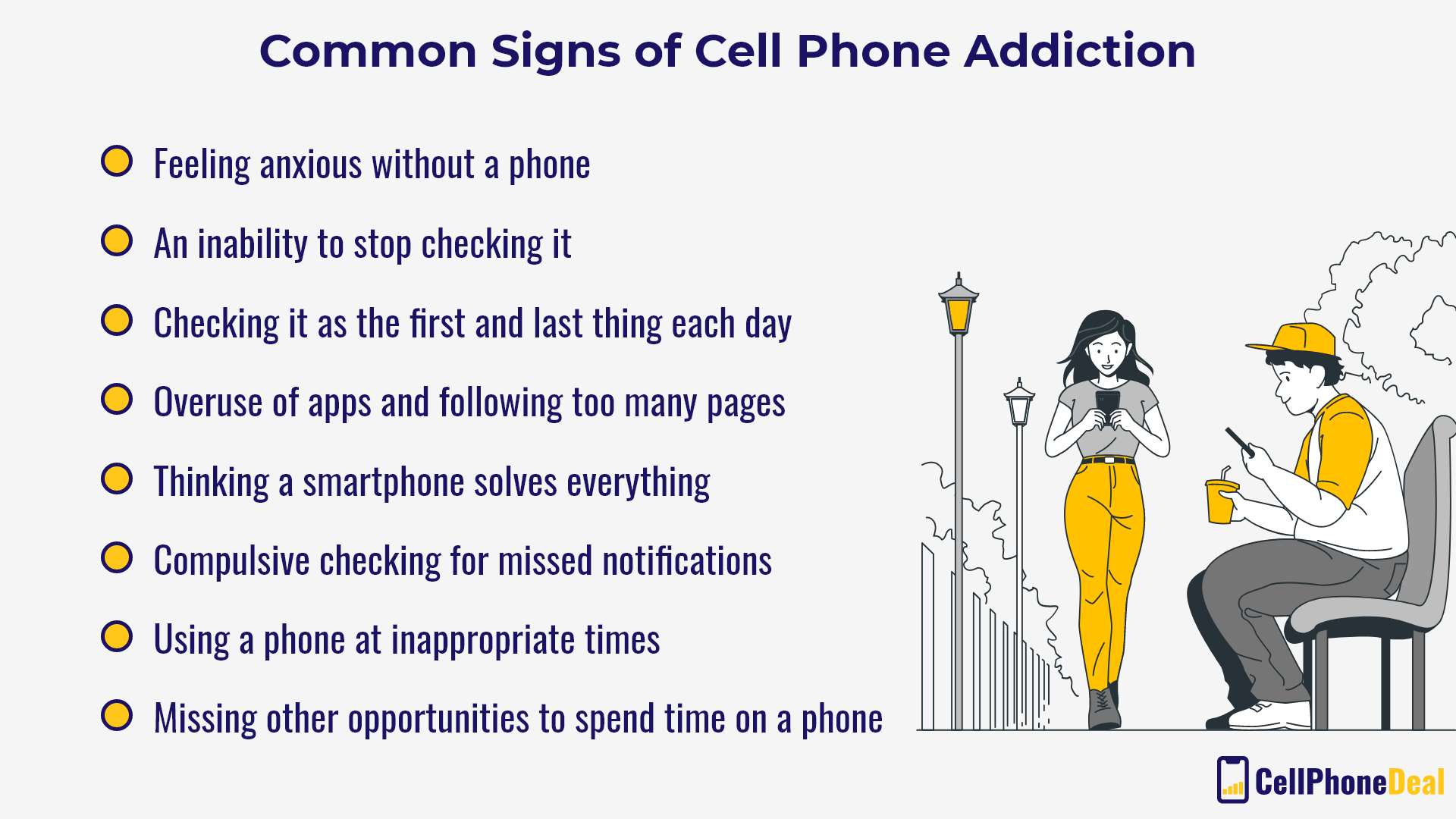 What We Know So Far

However, our understanding of addiction is regularly changing, whether from a personal failing to a disease or the result of a greater societal issue. Our understandings of genetics and neuroscience are also evolving, giving us a better clue on the causes of addiction, people’s predisposition, and how we can treat the issues. As technology becomes more deeply ingrained in our lives (even more than it is), we hopefully will have a better understanding of its effects and how we can counteract the negatives. Eventually, we might not even be using smartphones as we know them anymore.

There is also the matter of the apps and sites that smartphones connect us to, which to many might be the real problem. After all, without a connection, apps, and sites, a smartphone is just a small yet expensive rectangle. It might make for a good paperweight without the internet. Many of them are admittedly designed to grab attention and be addicting. Whether it is social media sites whose newsfeeds are designed to draw outrage to games whose mechanics are designed to make people keep playing (and spending money), app developers are sometimes on the side of addiction and unhealthy habits.

Yet one question that continually pops up regarding cell phone addiction is “is cell phone addiction real?” It might be a sign that people are getting dismissive of many new theories and syndromes, and people might not understand that they interact with smartphones differently than other people. Also, people associate addiction with drugs and substance abuse. Smartphones are not directly related to those issues. People are (hopefully) not injecting or ingesting smartphones in any way. What happens on cell phones is, in some ways, not real, so why would cell phone addiction be real?

However, the counterpoint is that the addiction to most substances and behaviors comes from the chemical release of dopamine into our system when we engage in that behavior. It feels great, and we want to do it more as a result. Therefore, the question then becomes whether using a smartphone triggers such a release of dopamine (or something similar). And the answer is often we aren’t entirely sure. Social media and gaming companies sure would like to hope so and are operating on the hope that their apps create a positive feedback loop for users, keeping them hooked.

The debate continues, though it seems to lean in the direction that cell phones are causing some sort of problem. Practically, however, we can see the truth for ourselves. Many people simply cannot look away from their smartphones and feel jittery or anxious if separated for too long. Whether there is a physiological component to the problem or whether it is just psychological is irrelevant to a simple fact: many people are dependent on their cell phones to an unhealthy degree.

One more note for your own research: it may also go under the name of Nomophobia (no mobile phone phobia)/ However, the term is relatively rare compared to the more easily understood “cell phone addiction”. Whatever it is called and however it is classified, it warrants further investigation and study.

So now that we’ve identified it as well as we are able, what exactly does cell phone addiction look like? Here are a few of the common signs and symptoms:

After reading this, we recommend that you put your phone down for a moment, take out a notebook and piece of paper, and take note of what your relationship with your smartphone looks like. How often and how do you use it? Could you go without it for a bit? Do you personally feel that you have a problem, or that someone around you does? Many of these questions only you can answer, and only you can know if you are comfortable with the truth or not.

However, also note that many people misreport how often they use and think about their phones. Many people check it without even thinking about it, and there are those times when you open it quickly and you don’t know where the rest of the hour went. It’s hard to track our usage unless we are making a conscious effort to. And if we make a conscious effort to, that might taint the findings.

How Much Do People Use Their Smartphones?

There are a few points that also help us ground the problem and put it into perspective in the real world. Your own usage, whether high or low, might be biased. The people around you might have formed the same habits.

Note that these stats and points are only the tip of the iceberg. There has been so much more interesting research done on smartphone and cell phone usage, both in the United States and around the world. We encourage you to seek it out and learn more.

What Are the Risks?

Most types of addiction are extremely serious. Substance abuse can lead to overdoses and extreme antisocial behavior. It may cause irreversible health problems. When compared to a meth or heroin problem, cell phone use seems mild in comparison, and not worth much of our attention. In truth, though, the risks of smartphone addiction can be just as serious as any other addiction if usage is not kept in check. While we cannot list every possible consequence, here are some of the most common problems or worst outcomes:

Something we would like to make a special note of is that children can be especially prone to smartphone addiction. For better or worse, children are getting access to mobile devices at younger and younger ages. You might see a phone given to an energetic child in public, or a child talk about what games they’re playing on their phone. The specifics might differ by age, but the fundamentals remain the same: the phone makes for a great babysitter, and children might be missing out on other things as a result.

This leads to bad habits forming around phone use at a young age. Bored? Break out the phone and do something on it. Is a child causing a stir at a restaurant or at a family gathering? Give them a phone and they’ll be engaged in the corner. There’s always one more thing to check or be amused by online. This is hardly natural, and such stimulation is addicting for anything, especially for children.

And worst of all, these habits can stick with someone for a lifetime and be even harder to break. They formed during a developmental period, and they’re seen as normal. This can lead to serious detriments over time and be a weight someone never entirely gets over. We’re only starting to see the effects, and we’re waiting to see the long-term implications.

For teens, the problems can be greater. A great deal of bullying happens online and on social media, where it is not so easily spotted, and teens cannot so easily escape it. Teens who use their phones too much might feel utterly trapped in a loop of bullying, unable to escape the torment of their peers. It does not need to be said that this has negative effects, both short-term and long-term. And while overuse of a smartphone is not the cause, it does enable the problem.

What You Should Do About Cell Phone Addiction 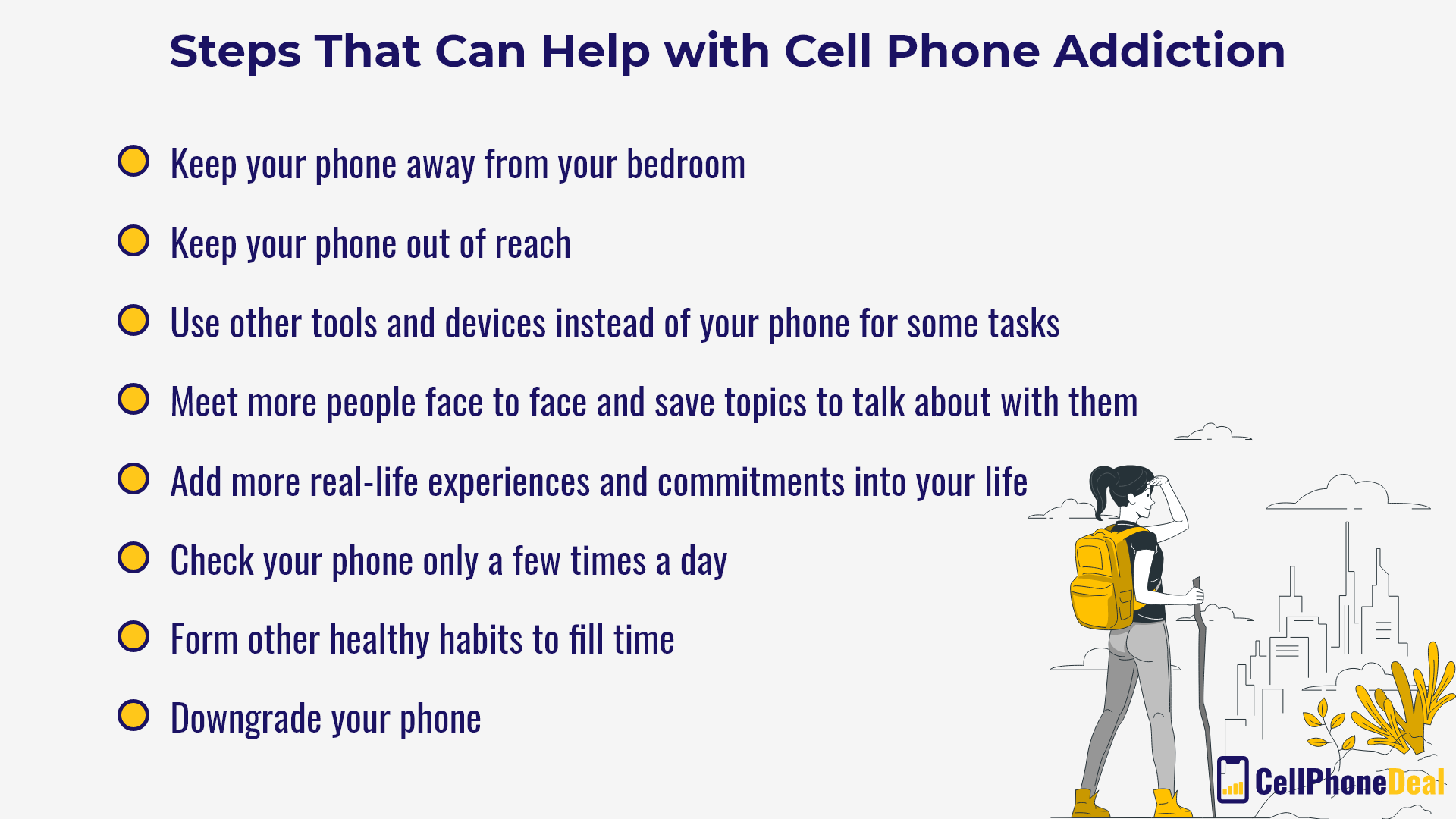 Cell phone addiction is one of those issues that is tricky to deal with if only because cell phones are constantly surrounding us and most of us need one to work and survive in the modern world. It’s not so easy to get rid of, even if we can use it less. People will feel as though you’re burdening them if you do not have one, and you might find yourself with fewer opportunities. Nonetheless, tackling the problem head-on is necessary, or it will likely only get worse over time.

We are not licensed professionals, and you should see one If you have a problem, here are some things that can help:

On a closely related note, there is the problem of social media addiction, which is just as recent and just as a problematic phenomenon. People, hoping to become the next social media star or just get more friends, followers, and likes than they did the day before, constantly check and post on social media. They do so to the detriment of themselves and potentially the world around them. Chances are you probably know someone who has this problem to some degree, and you worry a bit about their habits.

While we won’t go into extreme detail in this piece on the issue, we will say that the two problems are closely linked, and one might be part of the other. We recommend that you pay attention to your social media usage regularly and consider taking a break occasionally if only to see how you handle it.

Similarly, there might be a more general internet addiction, which is a problem for many people, especially younger people who grew up with electronics. While these problems are like smartphone or cell phone addiction, they are indeed different. As such, they should be researched and handled separately, except for the parts where they might intersect here. While the root is technology and a constant connection to the virtual world, the psychological causes might be different.

Cell phone addiction is a serious and growing problem, yet there is a lot we are still figuring out about it. There is no one-size-fits-all solution to this problem on either a societal or individual level, and we still have so much work to do combating it. Like many things, smartphones can be extremely helpful if used properly and in moderation, but sometimes people can go too far. We hope that the information above has been helpful to you and that you or your loved ones can overcome this problem if it’s there. It won’t be an overnight fix and it won’t be easy, but your life can and will improve for it.