How Many Text Messages Do We Send Every Day?

Texting has taken over a major portion of many of our lives, and it is not just teenagers who text all day. Nearly all of us do it to some extent, likely from the same device you are using to read this article. And if not, that device is certainly within reach and there might even be some unread messages that you need to get to. Perhaps you just checked them a few seconds ago.

It might seem like a silly line of thought, but that is the reality we live in now, and there is a sense that we cannot escape texting. Yet how much do we text, and how much texting do the most active texters among us do? These are questions that can help show our habits and change them if we feel the need.

And with the framework set, we ask you to consider the following:

Once upon a time, people did not have unlimited texting and the character limit for texts was much stricter. The one-word messages of today were not cost-effective, and many of the abbreviations we use today were invented to make the most of a single text or get around much harder, as well as make messages easier to read (to some of us) in our busy lives.

Of course, that is not the case anymore except with the cheapest of plans and phones (likely pre-paid), and people can text as much as they please. In fact, in emergencies, people are advised to text instead of a call to not strain the mobile infrastructure so much. And it makes complete sense: texting is hardly as difficult on systems as calling someone. Telegraphs were for a time far more common than telephones, using rudimentary technology to accomplish the same goal as texting (albeit in a far lengthier manner). In truth, the idea is not far different.

Furthermore, people simply do not use SMS to text as much anymore with the advent of Facebook Messaging, WhatsApp, Snapchat, Twitter DMs, and other forms of online communication. To keep pace, texting needed to allow for a lot more, and so it has. You can easily send pictures and other types of information (though not all types) via a text message.

However, technology improving is a double-edged sword in many regards, and people are concerned about hacking, their privacy, and people mining for past statements or images. There will always be people texting as long as it exists, but other, more secure and removed (people do not like to give their phone numbers away so easily but will be happy to chat with someone on an app where a block is easier and harassment better mitigated) apps might be the future unless text messaging at a baseline can keep up.

As an important side note, technology has made it easier to text as well, making more people able to do it. While people using flip phones in the early days had it hard typing in several presses for each character (and often messing up in the process), now we have predictive text, full touchscreen keyboards that only improve over time, and speech-to-text to make things easier when we are driving or have our hands full. Anyone can text at practically anytime and send whatever they want, perhaps increasing the volume of texts overall.

The Number of Messages Each Day

There will of course be a great variance in the number of text messages sent from each person. Some of us practically or actually text and message people all day for a living, other people want to become the next social media influencer (which involves a lot of texting and interaction if you want to do it right), and some of us still do not have a smartphone or even a cell phone, and have no interest in getting one. While we would like to go over every group, general averages can tell us the most and are what we have the most reliable information on.

Overall, as of the most recent stats, we could find (it always takes a little bit to get precise data on this), about 27 billion text messages each day worldwide. Also, 81 percent of Americans text regularly and 97 percent of adults text at least once a week, which is practically all of us. It is easy to calculate that on average, we are sending dozens of texts every day. While many of those texts could be automated or strictly utilitarian in nature, the fact that most automated tests do not result in a conversation mitigates this factor.

Worldwide, billions of people are texting. This number only grows month to month. Still more people have smartphones in the world. If you have a phone on earth and have service, your text, and it is as simple as that. And given that we have a bit more than 6.5 billion smartphone users currently, it’s easy to draw conclusions. In a smartphone filled with other apps, many of them extremely useful and nearly necessary, texting is still the most commonly used function.

Looking at a different resource, we cannot necessarily determine the exact amount of texts sent every day, but we can see how many texts were sent in total in the United States, and just how much that has increased over time. 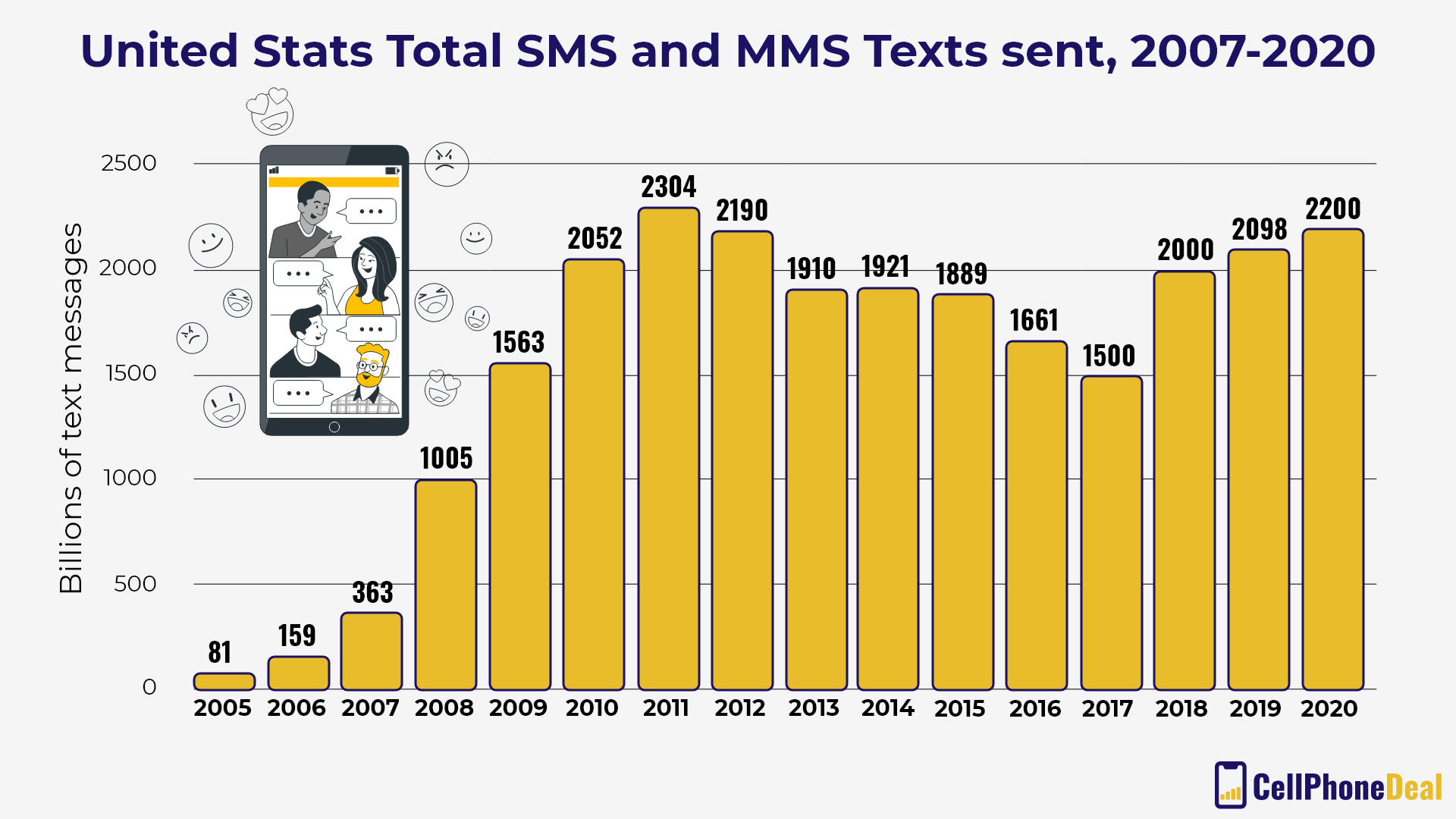 We’re still waiting for more information from the last few years, but it might be harder to come by given the number of providers that provide texting services and the vast amount of information included. Yet even a few years ago the number of texts was unimaginable. What will eventually come will not be much different.

So what do we think of as a text message? Is it simply something from an SMS protocol, and not something like a Snapchat message, a quick message sent on Facebook, or something else? What about pictures that we send each other? If we give the picture a caption, should we categorize it differently? If a message sent on slack or discord is sent from a computer, is it different than if we send it on our phone? Cell phones have become so advanced that the lines have blurred to a degree, and while the argument is mostly semantic, to get accurate data we must sort out these distinctions.

The answer is, for practical terms, absolutely, at least those sent on cell phones. They serve the same general purpose, use much of the same technology, and come from the same devices. In most cases the same app that we do other messaging on can become our default SMS app as well, switching over with a quick tap or automatically determining things based on the recipient or previous history.

On top of that, these app usage stats can tell us a lot as well:

That being said, SMS is still by far the most popular messaging option used worldwide, and will not be going away anytime soon as other services might get censored or might not be available in certain countries, limiting their usefulness.

How both people and companies use texting in the future might be linked to one simple fact: people check their text messages far more than they might check other forms of communication. Unless you already know who it is from and that you aren’t interested if you see a text you are likely to open it sooner or later. That certainly means texting can be far more valuable to people who need to make sure they are heard or get a response. You probably have noticed it in your daily life and interactions.

About 98 percent of people open and at least scan a text message, and 45 percent of SMS messages get a response (this is far more than email or most other forms of communication). Most SMS messages are read within a few seconds. Given how protective people are of their phone number compared to their email address or some other forms of contact, people will naturally think there is a reason for someone contacting them or it is someone they know and want to hear from.

On the business side of things, texting is becoming more valuable for companies, even after the initial wave of automated texting when cell phones were common. People respond to offers via text, and 50 percent of people in the US that get branded texts purchase in the future.

While we do not expect companies to start bombarding people with coupons and offers via text uninvited (lest they suffer a swift block), customer service via text will become more common, and people might look to get quick help via text, especially as the recent pandemic has forced companies and people to come up with more out of the box solutions for customer service, regular service, and delivery options.

Texting in the Future

Now that we have the numbers for today and some texting numbers from the past, what can we expect from the future? Now that everyone has a smartphone and texting is easier than ever (we truly barely even think about it), what will the numbers say and what will we do about them?

Depending on how you look at it, things could go one of several ways:

Researchers, futurists, and other interested parties will all be investigating this question and the possibilities, and likely trying to take advantage of whatever the results may be. As far as your individual interest, it likely is just what is easy and safe to use, and how often your friends and family use texting in their daily lives.

Texting, or variations of it, are going to become increasingly important in the coming years, as recent times have shown us just how often we use it and just how much we need it to keep in contact with friends and loved ones across the country and beyond. We hope this allowed you to reflect on your own use and on technology in general, and that the results informed you and made a positive impression.