How to Boost Mobile Hotspot Speed on Your iPhone

Out of the many wonderful and exciting things your smartphone can do, it can act as a mobile hotspot to create a network other devices can use. It does so from a data plan, and it can be convenient in a pinch when you need to connect to the internet with another device and no WiFi network is handy. There are disadvantages to using it; it won't be as fast as most WiFi networks and direct connections, but you will be able to work practically anywhere and do the things you need to do.

If you're reading this, you may have tried the hotspot feature on your phone and are not satisfied with the speed. Well, not to worry, you can do things to speed it up. All the options might not work in your particular case or for your iPhone, but go down this article and try everything, and you're sure to get at least some improvement.

Here's what you can do:

What Can Cause Slow Hotspot Speeds

Before anything else, let's talk about common problems that can lead to slow hotspot speeds or a spotty connection, whether on your iPhone or another phone. 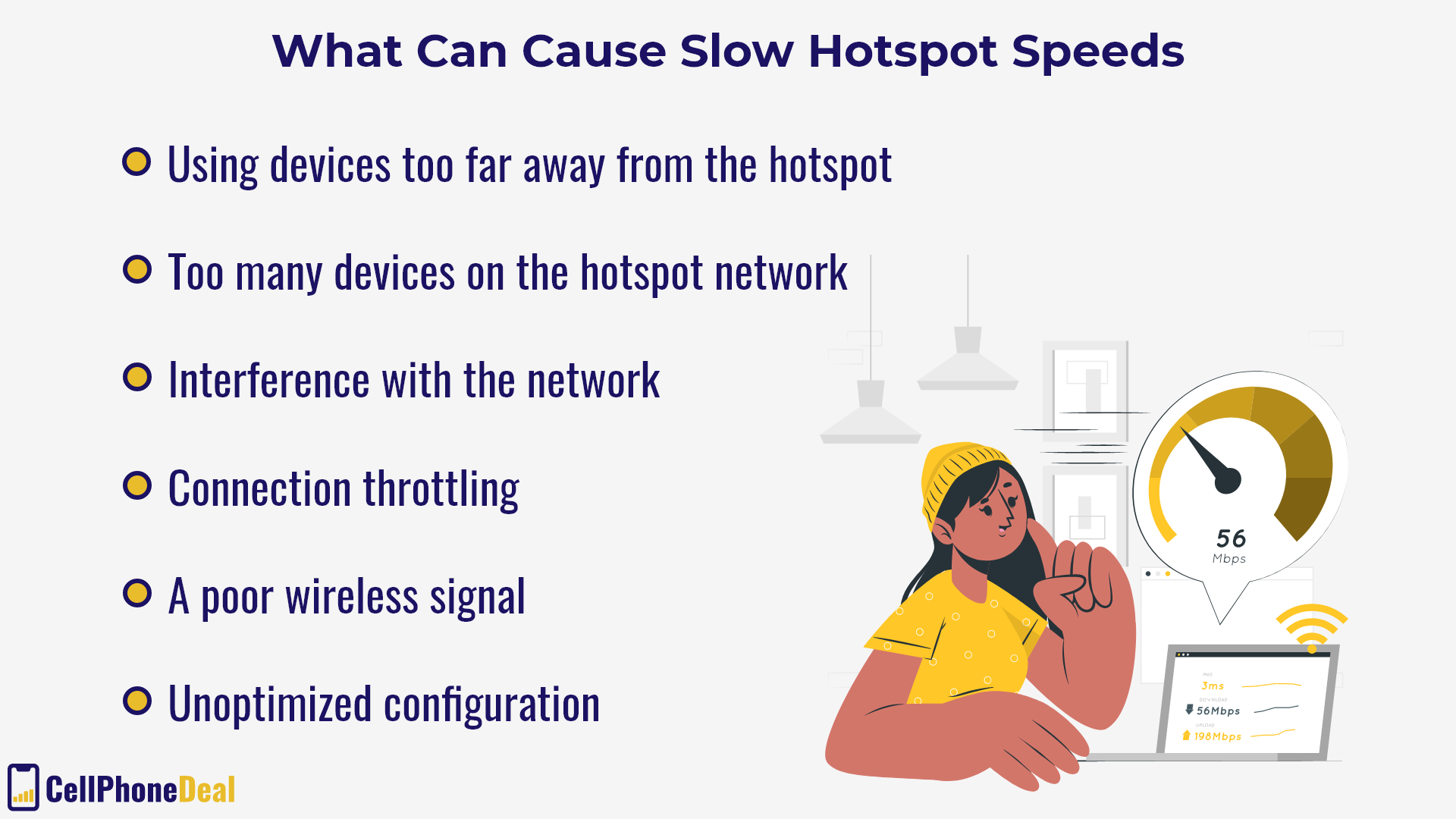 We'll be addressing most of these problems in the sections below, but try to think about what might be the problem ahead of time to make things easier for yourself.

WiFi these days is generally done over two different channels: 2.4Ghz and 5Ghz. Do you know which one you are broadcasting from your phone as part of your hotspot setup?

If you are using 2.4Ghz, you might have a more extended range but slower speeds.

If you can use 5Ghz as your broadcast channel, you will benefit from much faster speeds and an overall better connection. There is, unfortunately, a shorter range, but if you are in the same room as your hotspot (and you should always have an eye on your smartphone).

The iPhone, by default, will use the 5Ghz broadcast channel, but it's possible the more extended range or better compatibility of a 2.4Ghz channel. You also might have changed it previously without realizing it.

How do you change your broadcast channel? On your iPhone, do the following:

Remember that while changing to 5Ghz will make things faster, you will not have the range you used to. You'll need to keep all relevant devices in a more central location. If this doesn't work for you, you might have other problems.

Note that this differs from how you do it on an Android phone. For reference sake, you change the broadcast channel on that by doing the following:

Placement and surrounding objects can play a factor, such as the following:

You can do everything else right, but fixing the service provider you are using and the coverage you are getting from them is a bit more challenging to tackle. Unfortunately, it might be the only problem you have. Not all providers are equal, and you might be living or working in an area that gets poor coverage from your provider. You may want to look up more about how other people find their service or find out more locally-focused information.

If you are already deeply unhappy about the services you can get and the poor hotspot service is just one more thing, you might want to consider switching providers. It is not a choice made overnight, given the effort involved and possibly the expense, but it can considerably improve your life. We recommend you compare your current service to other options and see what else you can do before making the shift. However, if you're sure, you can use this site to research and learn about other plans available.

What About the Phone You Are Using?

You might be limited by your "equipment," so to speak. The hotspot capabilities might be limited compared to newer models if you have a much older phone. iPhones often seem similar at first glance, but their hardware improves network capabilities with each mode as well. You might be quite limited in the number of supported devices on the network, the battery life while it acts as a hotspot, and the general speeds the hotspot is capable of. Hotspot capabilities should not be the first thing you consider when getting a new phone, but you can at least keep them in the back of your mind.

While we cannot go into detail about every iPhone model or general smartphone model, you can look up your phone model to see what kind of support it has and how it stacks up compared to what is available today.

For example, is your phone capable of using 5G? If not, it might be time to upgrade soon if you want the fastest hotspot service available. You'll also see benefits in general speed. However, this depends on what you can afford and whether 5G is available in your area. While the rollout is well underway as of this writing, it is not universal and might still be some time until it is as widely available as 4G.

You can also look at the general hotspot specifications, the range of the network, and other notes.

Have You Hit Your Data Cap?

With most data plans, there's a limit, and on top of that, there is usually a limit on the amount of data you can use when your phone is a hotspot. Given how restrictive these limits can be, you probably aren't going to be watching any 4K movies on your data plan. And there are "unlimited plans," but generally, these work by giving you top speeds up to a certain amount of data usage (it could range anywhere from 5G to 100GB and then throttling your data plan to a slower speed after that. At this slower speed, some smartphone hotspots are effectively useless.

Unfortunately, if this is the problem, there's no cheat or shortcut around it. You must invest in a better data plan to keep getting good speeds. It can be costly, but depending on your need for a hotspot, it can be worth it.

If It Still Isn't Enough

If your mobile hotspot needs are still more significant than what you have and what these tips can improve, you might need a more dedicated device than your phone. There are mobile hotspots with plans available from every major carrier.

However, these are investments with their own needs and considerations. Not every hotspot is made equally; no hotspot will be the best choice for everyone. When looking at potential hotspots, consider the following before making a final choice:

Speed: What sort of connection is the hotspot capable of providing? This comes down to multiple factors, including the bands supported, the WiFi configuration, the hardware, and more. We encourage you to look at the connection types, maximum bandwidth, and other stats.

Number of Connections: How many connections is the hotspot capable of supporting? The best hotspots can support 30 devices, but you should look for at least a dozen supported devices.

Build Quality, Options, and Interface: These might seem like small things, but they are not small if they would make it so that you're less likely to use the hotspot in the first place. It would be best if you considered these things. If there are significant flaws, another hotspot will best serve you.

Price: Mobile hotspots can be expensive, with the absolute top models costing about $800. On top of this, you will need to pay for a monthly data plan in most cases. This can be expensive, so most people will not want to buy a mobile hotspot, which often costs $50 a month separately. This is a separate expense from a data plan; this rapidly increases over time.

Service Provider: Most hotspots are linked to and only available from a particular major provider. Your hotspot and provider decision will go hand in hand; if you do not want to mix your providers, you might find that your options are minimal. A couple of great hotspots are unlocked but often expensive, and you will still need to pick a provider.

Do you want to get the most out of your hotspot, whether from your smartphone or a separate device? Do the following:

Finding suitable options to improve your mobile hotspot speed is not an exact science. After all, many variables are at play, and you probably aren't using the hotspot feature in the same place every time. Nonetheless, improvements can be made and we hope that this the above information, you were able to get the help you need to make your hotspot feature something you can rely on. It's one of the best things your smartphone can do in a pinch, and we would hate for you to be unable to use it. Thank you for reading, and we encourage you to return to the post as you feel the need.