How Will AI and Automation Affect Your Smartphone

What is your current relationship with your smartphone, and what can you do to better integrate yourself with it? Rather, how can you save more time when using your smartphone? The average person spends at least a quarter of their waking hours on their smartphone, and while that time might be well-spent, there are benefits to reducing it.

Ultimately, what would make the smartphone experience better for you? That is the question many developers and smartphone manufacturers have been asking since day one.

And after hardware reaches a certain level, there will be no more important development for smartphones than the software and automation used on them. Eventually, this will come down to more intelligent AI on your device, whether as part of the OS or in apps. While we cannot predict everything and some developments are years away, here are some key predictions and trends to keep your mind on this year and beyond:

There are a host of different assistants, AIs, and other tools installed on smartphones that are meant to provide voice controls, easier searching through your phone and the internet, and whatever support you need that they are capable of providing. Some are more advanced and well-developed than others, and some will be able to almost tell you what you need before you realize you need it. They are the vanguard of smartphone automation and AI for the consumer, and as such the latest versions of them will be what you see first from some future ad campaigns. 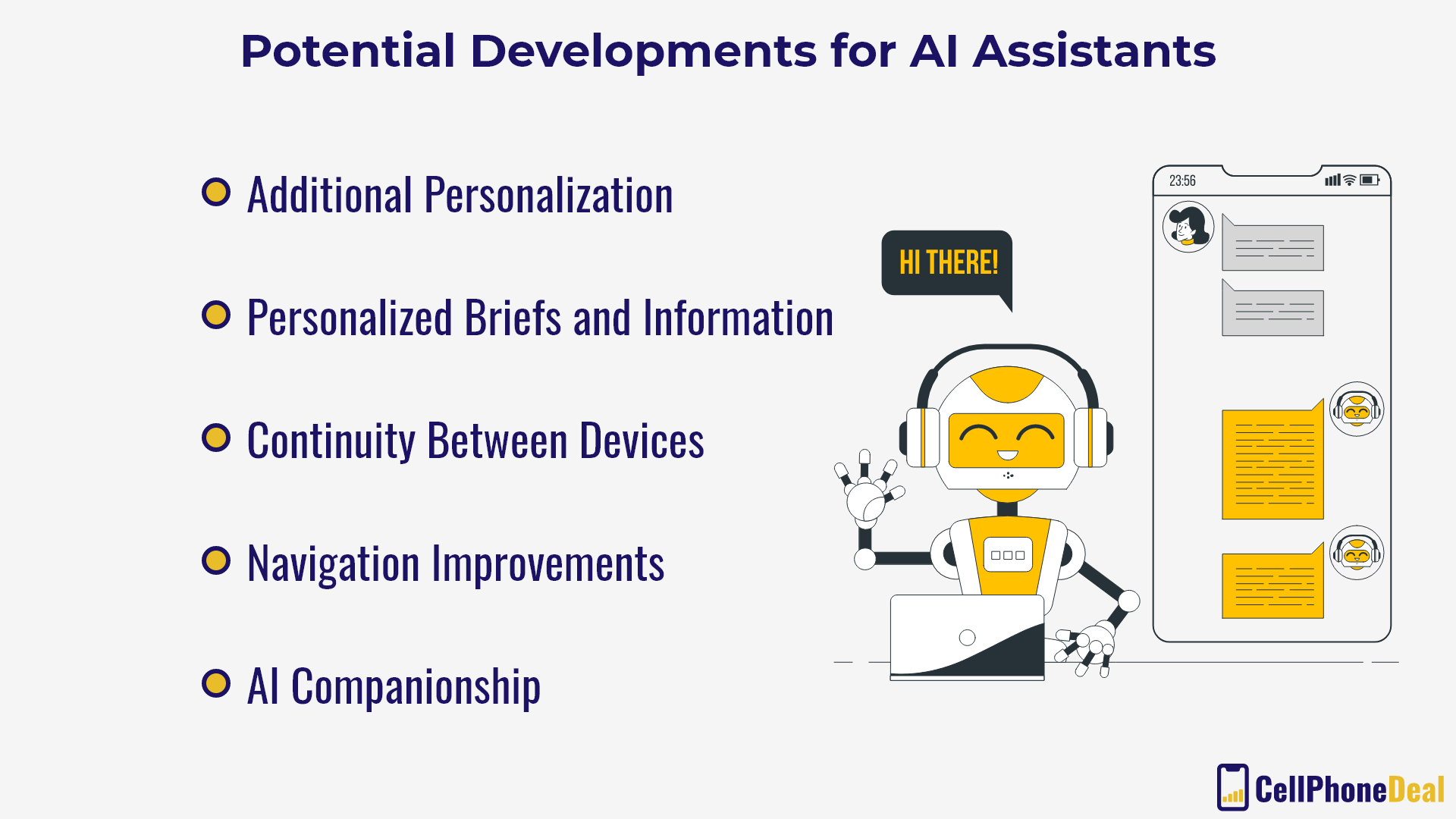 Yet what steps need to be taken with these programs? What can we expect when it comes to their everyday usage?

Think about how far translation services have come in the past decade or so. While early on you could find translation dictionaries online, but it was hardly anything along the lines of real-time translation. Now we have apps and browsers that can translate pages nearly the second you load them and can translate voices so you can have a (partially) inhibited conversation.

However, there are still concerns to be had if we let AI communicate for us. While translating words and sentences is already within our reach, the same cannot be said for AI recognition of body language. Similarly, we may have literal translations down pat, but some languages are notoriously hard to translate the nuances of. How something is said or where the emphasis is placed on a word can mean a world of difference. It will be some time until AI can tell the difference in these situations.

We might move on from just voice commands and touch commands directly to the phone. Smartwatches may become more advanced and can better pick up our commands and pass them on accurately. Simple gestures can be programmed into phones to open certain apps or type basic words. The only limit here is the number of distinct gestures we can think of (that wouldn’t be a hassle to use) and the human imagination. AI might be able to determine recommended gestures that we wouldn’t make on accident and help us program them.

If we want to go even more deeply into the idea, perhaps one-day smartphones can respond to provide certain features or settings when biometric data or conditions are met. Suggesting a meditation app or calming music when there is noticeable stress in the body. It will not be perfect, and there will be missteps along the way, but such features could lead to a world where smartphones are even more our companions and silent partners in everyday life. There are concerns to be had as well (what is a smartphone is wrong and goes too far?), but now the benefits generally outweigh the disadvantages.

On top of everything else people need to do, living a healthy life and forming healthy habits can be a difficult challenge, and many people need help with that. And personal trainers, nutritionists, and similar help can be prohibitively expensive for many and not always available. And while it will be a long time before an AI can match the expertise of someone experienced in the field, it can work with a user to help create a better life and help provide options.

Furthermore, with biometric information, you can get real-time updates on their health, fitness, and more. An AI can help tell someone when to take a break or when to push the limits. It might even notice the signs of a long-term condition and alert the user to get checked out by a doctor. We are already seeing stories of smartwatches and smartphones tracking data that eventually saves people's lives.

There might be concerns that an AI can go too far with this and encourage behaviors that the user does not wish, but it could lead to smartphones that make it much easier to live a healthy life and detect problems right before they start. You may also want to consider limitations strongly here. A smartphone is not a substitute for regular physicals and appointments with your doctors.

Some might call it “AI vision” while others might call it a constant usage of AR in conjunction with other devices. It was similar to what Google Glass was going for, and that didn’t turn out so well due to both cost and privacy concerns. Though we must ask whether the privacy concerns are so great, and whether another attempt might be tried soon.

A great app or feature might come along with it, making it a must-have item. We already saw this in a limited way with some popular AR games. And once a critical mass of users has been reached, there will be little to stop AI-driven AR from being the norm from then on.

What You Want, Before You Want It

Need a product? An AI can certainly help with that, recommending all the top brands and the exact item you need even if you aren’t certain of the name. It might pull from search results, search listings from stores nearby, and more. The same could go with meal planning ahead, considering sales at the local grocery store and recipes that fit within your diet. It can all come together, and it will be strange at first but eventually appear seamless. And it won’t be so simple at first, but such options are where we are eventually headed.

However, there are concerns that this could turn into something of a dystopian nightmare, with assistants recommending only certain brands that pay for advertising with the smartphone or OS creator. And while it might not shut out other businesses completely, it could nudge some businesses up in the recommendations or businesses, much like how Google search results work today.

The smart home (and smart life, so to speak) is here, and your smartphone and whatever you have on it is the key. You may be using a few IoT devices already, and you might be able to get more at a low price. They and your smartphone are being designed and improved in tandem, and automation will play a key component in developments to come, whether it involves smart thermostats, your car, or just your tv remote.

The IoT is such a diverse set of devices and possibilities we cannot go over everything here. Just note that as smartphones develop in general, we will see more connectivity and more automation regarding the devices that make up our everyday lives.

While most of what we have talked about have been the positives of getting a smartphone, there is a darker side to automation and the greater usage of AI, especially if it goes unrestricted or without oversight. This isn’t everything, but here are the main concerns:

The Cost of AI and Development

Also, note that many of these developments will be slower if they come at all, and they might require hardware that is vastly better than what we have already. This is all very expensive on the backend, even if it doesn’t seem like it when we install apps or use an OS. Whatever flaws the current apps and assistants may have, they are strides ahead of what we realistically thought we would be.

How will AI and more automated features affect the costs of either smartphones or apps in the future? After all, companies are not funding and organizing the R&D out of the kindness of their nonexistent hearts. Will automated features or an AI be a separately sold feature, and if so at what price? At first, it will be prohibitively expensive to all but the extremely wealthy, as with much new technology. After that, though, at what point will it even out, much like the prices for smartphones today?

There is no clear answer to this yet, as we need a use case for it. It might be the case that some efforts turn out to be unprofitable, with development going down the wrong rabbit holes. There is a risk to investing in AI.

However, there is the other side of the equation in that there is a lot of money to be made by developing AI and automation in general. We’ve seen a huge increase in automation in industry and service jobs already. Companies would love to be able to trust and rely on that further. Similarly, productivity can increase across the board due to automation and AI. If done right, the investment will pay off.

By all accounts, artificial intelligence is certainly limited. It can excel in performing certain tasks, but as a generalized tool, it breaks down when you give it complex problems or decisions to be made. An AI might not understand the importance of life or all the potential, but rare reasons to not do something that we humans take for common knowledge. While experts and developers will try to prepare for every scenario, they are not perfect. You might see some scandals or deep concerns about certain products or assistants. This in turn could slow down development compared to what it could be.

And after talking about cost in the previous section, AI won’t just get better on its own (at least not yet). It needs developer time, and developer time is expensive. Creating more intelligent programs might become prohibitively expensive for the companies developing them. Or it might not be impossible, but simply not the best business decision for them until conditions change.

AI might also be artificially limited by legislation or by companies in the future, either to prevent misuse or prevent un desired automated tasks. Smartphones and device safety of various kinds will become an increasingly important debate over the next decade. We are already in the middle of a rapid rise in cybercrime with no end to it in sight. We may see attempts to limit automation and AI usage in it, however fruitless those efforts might be in the long run.

These are only a few possibilities. There are likely additional roadblocks to come, though we expect the development to continue regardless across the world.

There is no shortage of developments to come with smartphones soon, and it can be deeply complicated. Nonetheless, we hope that this article has given you some more insight into what might be down the line and some things to look out for. There will be new and exciting things, and there will be a lot of news stories to follow. Regardless, stay in tune with the industry, keep trying out new things if you feel comfortable doing so, and try out important updates for yourself. After a while, your phone might be more of a companion than ever. And even if it doesn’t go that far, it will be a far easier device to use.