Inside Clubhouse: The Invite-Only App

Let’s meet at the clubhouse? If someone said this to you, it would be normal for you to smile a bit and feel like you were a part of some special, well, club.

But while most of us think of baseball teams and golf courses when we hear the word “clubhouse,” Silicon Valley has changed this. Yes, you guessed it, Clubhouse is an app, and it’s becoming increasingly popular.

What makes this app so exciting to so many people? Well, as you will see, it’s a pretty unique idea, one that puts an interesting spin on traditional social media. But a big reason it’s become so famous is that, for most of its existence, it’s been “invite-only.”

This exclusivity has helped make it more desirable, and it also helps that people such as Drake, Chris Rock, Oprah, and Elon Musk have been seen on the app.

So, is Clubhouse just an exclusive app where famous people get together to talk to one another? Maybe it started as that, but it’s grown into so much more and promises to flip the world of social media upside down.

Here’s everything you need to know about Clubhouse, the invite-only app that has become all the rage in the tech world.

According to the official Clubhouse website, the platform is “a new type of social product based on the voice that allows people everywhere to talk, tell stories, develop ideas, deepen friendships, and meet interesting new people from around the world.”

In other words, it’s an audio-based social media platform. Some have described it as a “Medium for podcasts.”

For those who don’t know, Medium is a social media platform for writers and bloggers. Anyone can publish to it, and it’s a great way for aspiring writers to connect with like-minded individuals and promote their work.

Clubhouse serves a similar function and has similarly loose restrictions on who can post content and about what. The only major difference is that everything is audio, and all the conversations are happening live.

How Does Clubhouse Work?

An audio-only social media platform sounds interesting, but you might be wondering: what does that even mean?

Well, on the app, users are allowed to create chat rooms, known as “rooms” about pretty much whatever topic they want. Then, others can search for these rooms based on their interests and join in on whichever ones they want.

Once inside the room, the exact format of the conversation depends on the person who set it up. For example, one room could be just two people talking to one another with a bunch of others listening. Or, there could be a group or a panel, and the people listening are like the audience.

However, there is one feature that makes Clubhouse truly unique: anyone can join the conversation.

That’s right. If you stumble upon a room that is talking about business development and someone says something you want to comment on, you can raise your hand and the moderator can let you speak. Some rooms are more open – you don’t even need to raise your hand, you can just start talking.

In this sense, Clubhouse is not just a learning platform, it’s also an opportunity to make new connections, promote yourself, and speak your mind. Its open nature allows anyone to start a conversation about anything, and this opens the door for all sorts of new connections.

It’s for this reason that everyone is so excited about Clubhouse. It’s a platform similar to the social media apps we already use but it harnesses audio in a way that has never been done before, creating new possibilities never before imagined.

A Brief History of Clubhouse

Although it’s new and offers an exciting new take on social media, a lot of people still don’t know about it. A big reason for this is that Clubhouse is still relatively new. However, this is sure to change in the near future. 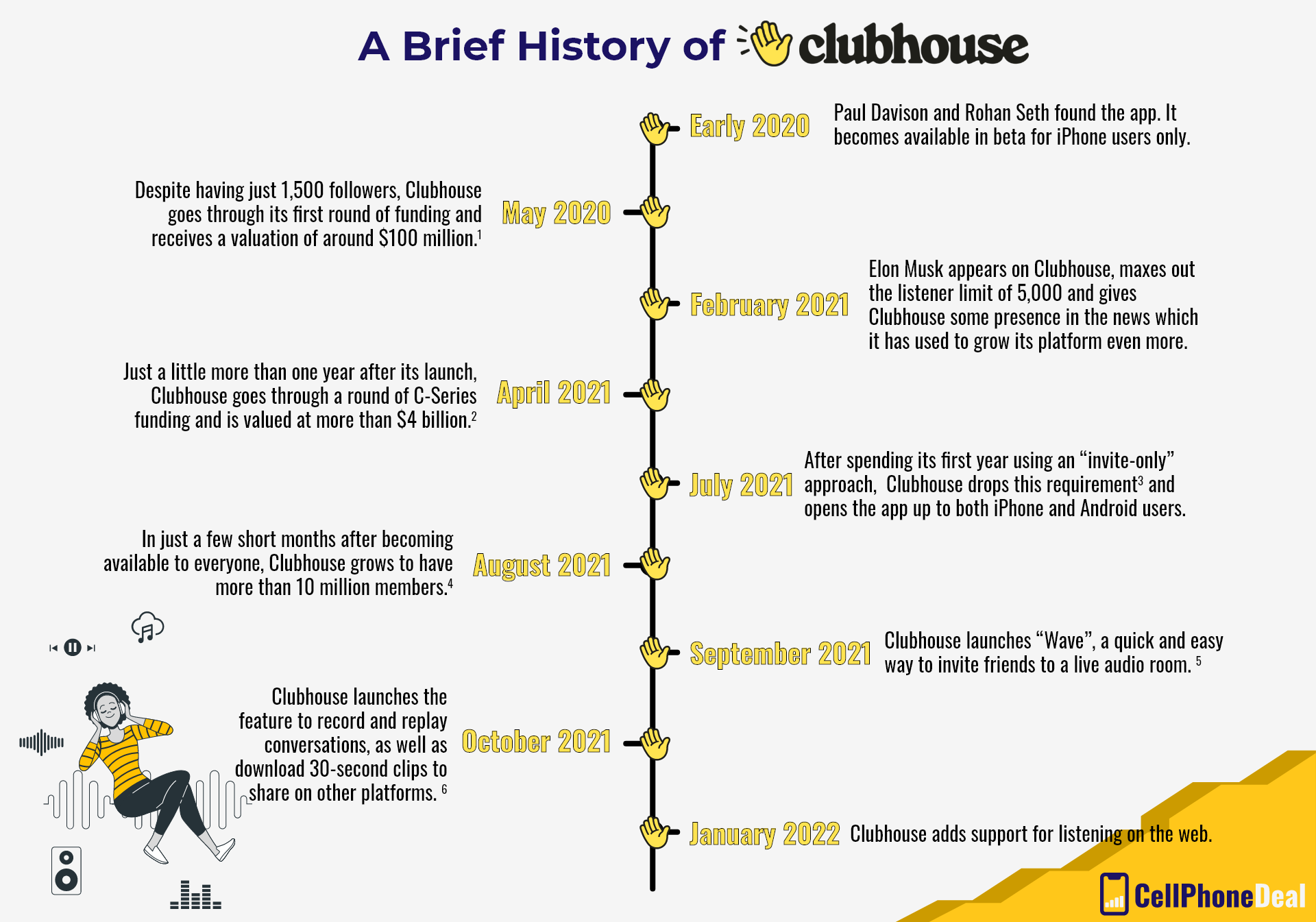 Here’s how things have gone up until now:

What are the Benefits of Clubhouse?

If the concept of an audio-only social media app intrigues you and you’re interested in signing up for the app, here are some of the main benefits of doing so: 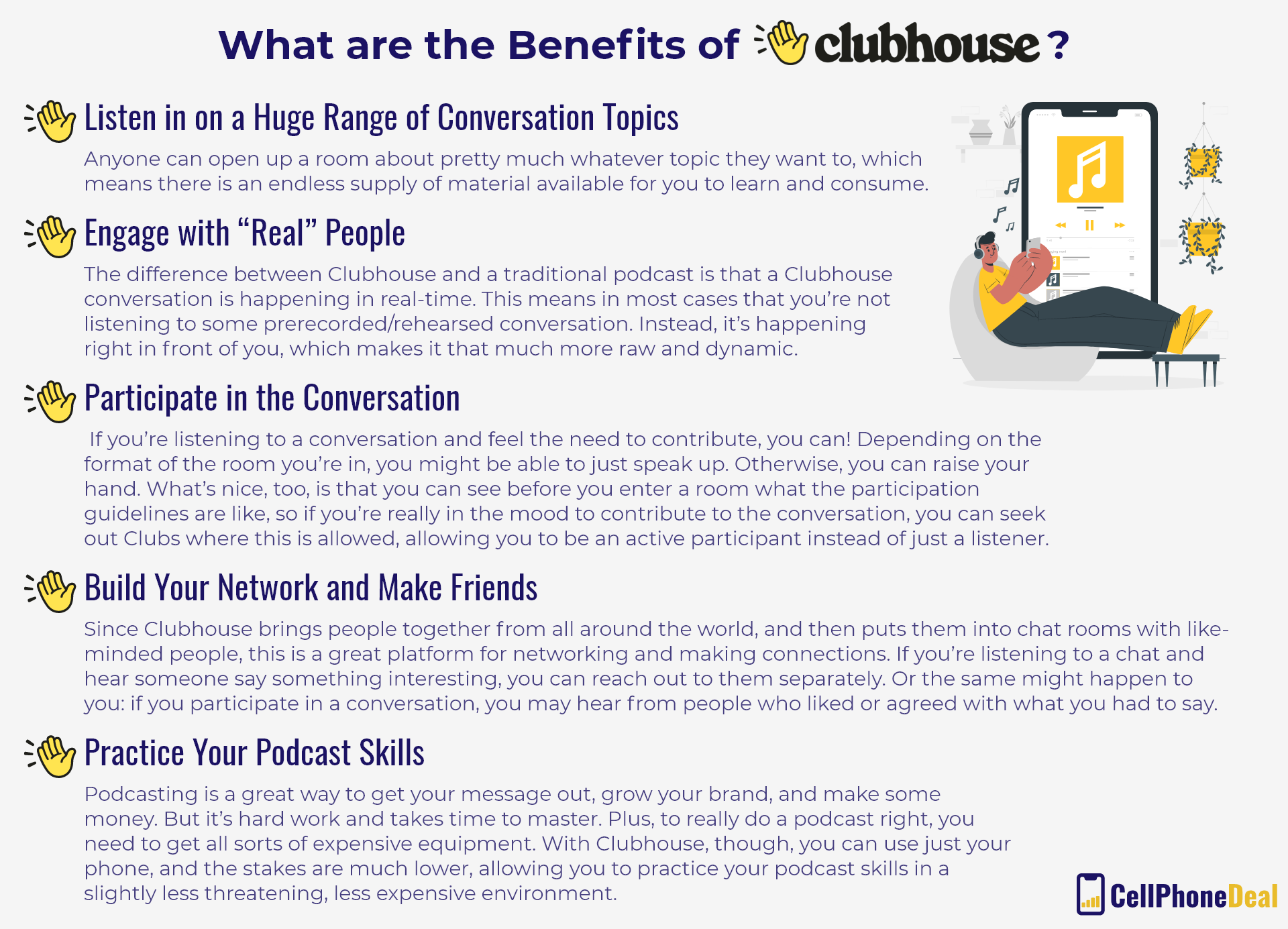 What are the Downsides of Clubhouse?

Although there are a lot of things to like about Clubhouse, it’s not a perfect app. There are some things to not like about it that you should be aware of. Some of these things may get resolved as the app continues to roll out into the mainstream and grows in popularity. But until then, here are some of the main downsides of Clubhouse:

All in all, it’s still a new app, and nothing is perfect. Up until now, those who have used it seem to enjoy its free-flowing, open style, which has led to the platform's growth and all the interest from venture capitalists. Going forward, it will just be a matter of whether or not the app can maintain its own momentum.

Part of the reason why Clubhouse has gotten so much attention since its release is because of its exclusivity. In the beginning, to be able to download the app you had to be invited by someone who was already on the platform.

One reason for this was to simply limit the number of users on the platform while it was still so new. Handling all of those audio conversations can put a lot of strain on an app, so there was an incentive to keep the number of people who could access it to a minimum.

The other reason for this exclusivity was to simply create a buzz. Conversations among celebrities that started on Clubhouse would often bleed over into social media and frequently wound up trending on platforms such as Twitter. That got everyone wondering, “What is up with this Clubhouse app?”

However, fast forward to today and that exclusivity is no more. On July 21, 2021, Clubhouse removed its app from the Beta stage and made it available without an invite. They also expanded and started offering the app to Android phones as well as iPhones, expanding their reach even further.

So, while the app started out as an exclusive meeting place for the rich and famous, it is now open to everyone. At the moment, it is growing in popularity. Will that continue? Only time will tell.

Does this audio-only social media app sound interesting to you? Want to join in on one of the many different conversations going on right this second? Build your network? Make new friends?

Well, if you do, then all you need to do is head over to the Google Play Store or the App Store and download Clubhouse. The next step is to simply make an account. The app will ask you some of your preferences, interests, likes, etc., just like any social media platform would. From there, it will suggest some rooms to join. The rest is up to you.

Currently, it is 100 percent free to join Clubhouse. The company has not announced any plans to change this in the foreseeable future, so get ready for some free fun and learning!

Clubhouse and Your Data

One concern some people have when they first hear about Clubhouse is “What happens to my data?”

This is a normal question to ask in the 21st century, during a time where nearly our entire lives take place online. And since Clubhouse is an audio app, using it could hand the company quite a bit of your data.

Also, while the app is free to users, it’s still a business, and that means it needs to find a way to make money. Like other social media companies, this will likely include keeping track of and using data it collects about you.

When you sign up for Clubhouse, you must agree to give the app access to all your contacts. This means that even if you don’t sign up for the app yourself but someone you know does, the company likely already has some of your contact information.

Furthermore, if you were to connect any of your social media profiles to Clubhouse, something the app encourages you to do, then you are also sharing all the contact information you have stored there.

If you wind up joining Clubhouse on your own, then this doesn’t matter all that much. You would give this information up anyway. But if you’re not interested in the app, and don’t want it to have your information, you might be frustrated to know that there’s no way to delete the information Clubhouse has stored about you.

Say you made a Clubhouse account to check it out and after a while decided it wasn’t for you. Since you’re smart about what happens to your data, you decide that you should delete your account. So, you log into your account, go to settings, and search for where it says “Delete My Account.”

Well, if you follow this approach, you’re going to be searching for a long time. This is because the only way to get rid of your account is by sending an email to Clubhouse’s support team. For a 21st-century tech company, this is rather archaic. And while you can deactivate your account, this is not the same thing as deletion.

Perhaps this will change as the app grows and attempts to appeal to a larger audience. But for the moment, once you make an account, you have to put a little bit of effort into getting rid of it should you decide to do so.

If we know anything about modern tech companies it’s that their primary business model is data collection for advertising. By collecting information on you and your habits, interests, hobbies, likes, dislikes, etc., social media companies can sell advertisers highly-targeted ads that are proven to be more effective.

Currently, Clubhouse is not making money. But it’s planning to. How? You guessed it. By collecting data and sharing it with others.

In other words, they are collecting data on you, and, by using the app, you’ve agreed to let them share that data with pretty much whoever they want.

Again, this is fairly standard practice in today’s world, especially when it comes to apps and social media platforms. If you’re uncomfortable with what Clubhouse is doing, then it’s unlikely you’ll like what any of these companies are doing. But before signing up for and using a new social media app, it’s important to learn what’s happening with your data.

Are You Ready to Join the Club?

Okay, now you know pretty much everything you need to know about Clubhouse. While it started as an exclusive, invite-only platform, it’s now available to everyone and growing in popularity. So, if the idea of talking with people from around the world, in real-time, about a wide range of topics using nothing more than your phone’s microphone sounds appealing to you, then get Clubhouse today. And if it doesn’t? Well, now you know it exists and you can keep on living your life like you were before...