The Expansion of Mobile Apps: What the Statistics Reveal

Mobile apps have changed the way we think about communication, commerce, and so much more in just ten years. They are a market worth billions of dollars (if not trillions depending on how you count it) and are responsible for tens of millions of jobs worldwide. It can be hard to keep track of, especially when it seems like a new killer app is coming out every month and a dozen more are falling into obscurity. The mobile app market is expanding, but what of the fluctuations? What can we know about the most popular apps and the smartphone market in general?

Not everything is essential, and much of what you hear might be marketing hype or last year's news. Instead, it would be best if you focused on broader trends. Here's what you should know about the future of mobile apps, as shown by critical trends and statistics:

What the Top Apps Teach Us

To talk about where the app market is going and how quickly they expand, we should understand the top apps, whether they've been the top apps for some time, and more. There is much to glean from the most downloaded apps and why people download them.

Therefore, let us take a look at the most downloaded apps of Q1 2022:

Now let us compare those results to the top apps of 2019, just two years prior.

As expected, many top apps are social media related and have been around for years. However, there are also some vast differences. The app types might look the same, but the apps themselves are different. Is SHAREit or Likee all that relevant in 2022? Sure some mainstays might switch ranks once in a while, but this is an environment where there is a new contender or even a new king every year, if not more often.

Gaming apps are almost their own ecosystem on smartphones and app stores. They are a huge source of revenue and are the most popular category on app stores by the number of downloads. The revenue they take in overshadows the entire mainstream gaming industry, taking up the majority. There is a reason that mobile mechanics are making it into most games and that more developers and investors are interested in the mobile gaming market. And while no individual app might be taking the world by storm (with a couple of exceptions) and beating out social media, that doesn't mean they aren't critical.

If you want more evidence of this, take a look at the amount of mobile gaming revenue over the past few years: 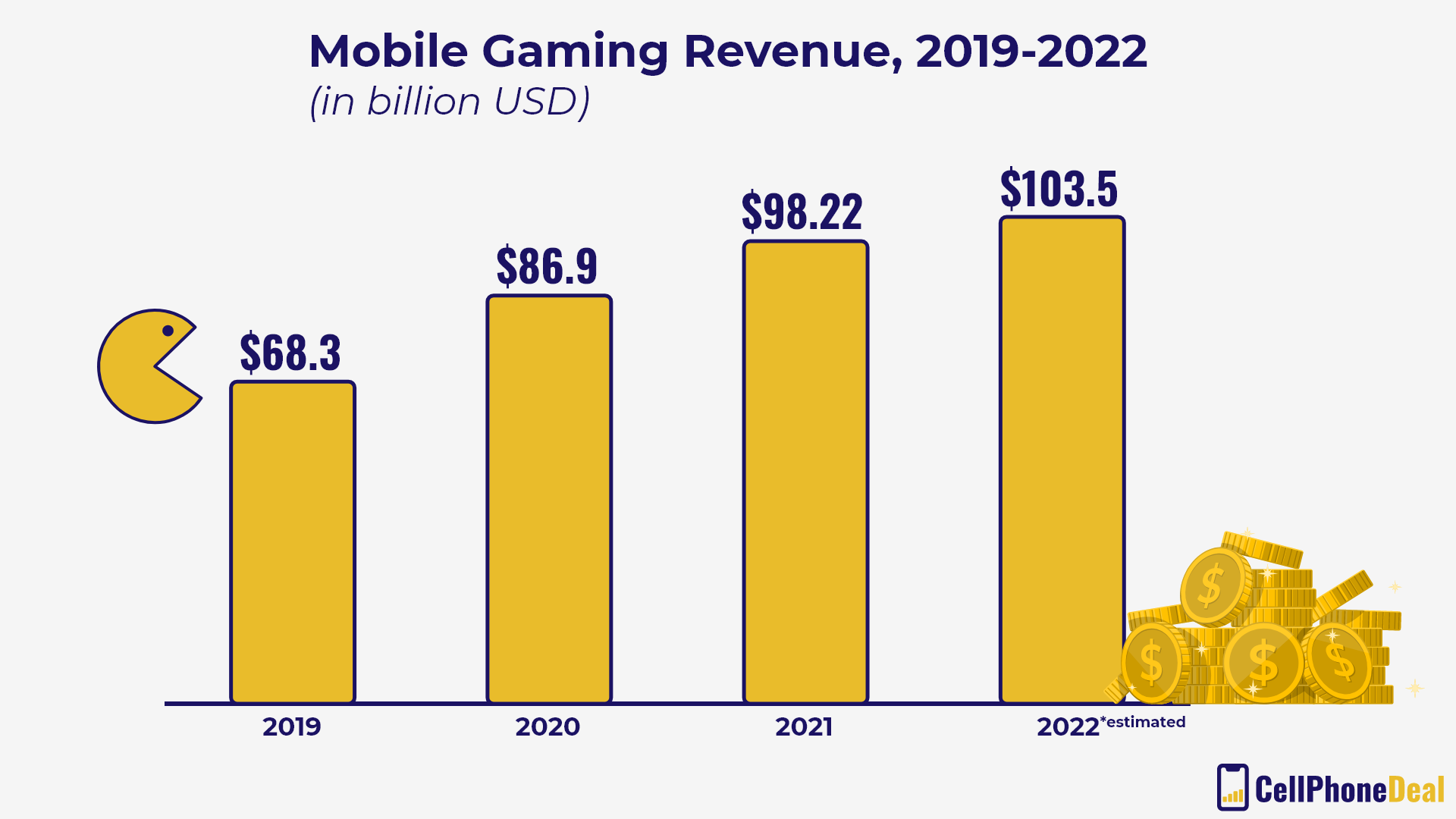 One last caveat is that some apps aren't downloaded so much because they are installed by default on many smartphones. Facebook is a default app on many phones, potentially affecting its download numbers. Think about the apps you had on your phone by default (whether you would have wanted them or not). Would you need to download it eventually anyway? Would you have used it? The answer for many is yes, and we should consider their place in the market.

Once we know them all, the final top apps of 2022 will surprise us and not surprise us. It will likely have a few choices in response to today's needs or what happens in the latter half of the year. And hundreds of millions of people will download them alongside the more niche apps. We recommend watching and seeing what patterns emerge in response to current trends and news stories.

Some apps have what appears to be exponential growth, at least at the start. A social media network, if successful, can gain a billion users over a few short years. No more products need to be made to support an app. At most more servers need to be used, and they are generally available for the right price. More servers and support are needed for another 100 million users to utilize some apps. And with most apps being free to use, growth is encouraged, and people are free to try out the next big thing. Popularity can come in waves.

You can see the same trend with popular online games. Once enough people want to play, or the marketing is good enough, everyone wants to play. The growth will never stop until the hype dies down or everyone gets their fill. And then it dips down, falling into obscurity or maintaining a stable user base for some time.

The trend might still exist in more niche markets but be smaller and slower due to having a smaller default audience. Yet all it takes is a critical mass for an app to become the standard and become very popular.

What does all of this teach us? It teaches us that an unknown app can "go viral" in what seems like overnight. We can try to see if there are specific causes, and there are, but they can vary. Essentially, if an app is well-marketed, is lucky in the timing of its release, or fills a desperate need of many users, it has a chance of becoming very successful. Other than these factors, price and convenience are most important.

However, there is a flip side to this. People have limited attention and limited time. As people move towards one app or activity, they must necessarily move away from another or at least spend less time with other apps. It's a cutthroat competition. If an established app no longer serves users well and there's a strong competitor, expect it to take over sooner rather than later, especially if it doesn't require an established user base. An app can decline or become irrelevant as quickly as it rose to the top. And we don't see much coverage of dying apps, though many exist and go defunct each year.

People do not necessarily use apps in the same way across the world or even use the same apps. Many apps are only in one language (unless it's a language you speak, you probably don't know about them or would search for them). And that leads to some interesting regional differences over time, and there are.

What can we tell from apps across the world?

Some people, perhaps even yourself, might be asking, "where's the money" at this point. After all, mobile apps might be free, but they aren't free to run. They need to bring an income in somehow, which means product sales or advertising (which leads to product sales). Apps provide for both, and they are certainly big business. You know well by now that advertising is how social media apps make most of their money. And with a user base numbering hundreds of millions to billions, finding an audience for ads isn't a problem. In fact, in 2021, mobile ad spending reached 288 billion dollars worldwide. By 2024, that figure is expected to reach 413 billion.

People will now look for anything online, and there is an app for every hobby. If there's something you need, there's an online store for it. And most of the major chains have eCommerce apps or at least a solid mobile site. We hope that you are paying attention to your spending or have a record, as that might be the best example of what people do online regarding eCommerce.

But while you're looking at your own spending habits, we have a few more questions you should ask yourself: how many purchases did you make on mobile? How much money did you spend on mobile compared to desktop purchases, and are you using these apps more or less than you did in the past?

Just studying eCommerce, in general, will be able to tell you that we are experiencing significant changes in how we do business and what retail might look like in the coming years. In some cases, the big box stores and retail chains hold as they always have (some categories such as food have not gone entirely online yet), but even they will have heavier online components such as easy-pick up, options to try out a product at the store, and more. In short, significant retailers must find ways to compete with online giants and small stores. Distance and being the only store in town don't matter as much anymore. The entire internet can be someone's downtown shopping center now.

Over the last decade, mobile gaming has been one of the most important uses for apps. It is enormous worldwide in one form or another, and it continues to grow. There are more games than a person could count, and there is a game for practically everyone. You will find that many games are coming out every week just for mobile platforms, on top of the games available for PC and consoles.

How did it become so popular? Availability, improved technology, and better development. Games for mobile are easier to develop and profitable (more on that in a bit), making them a decent investment for companies interested in the field. If there is a property or major gaming company, they will want to dip their toes in the mobile gaming space if they can. Yet not all are equal, and many fall into obscurity after launch. Yet as you can imagine, the risks are worth the rewards of a successful mobile game.

Over the last several years, as we've mentioned, mobile game revenue has increased significantly. Consider the number of people who have phones and play games. While most of those games are free, there are other monetization methods. You might be familiar with seeing endless ads for microtransactions if you play mobile games yourself. The gacha model is worth studying, as it is growing in usage and highly profitable.

And while much of the revenue from mobile gaming has come from China and Eastern countries, where there is more normalization of the monetization practices and smartphones are much more common than PCs and consoles, there is no shortage of fans across the world. The number of gamers around the globe has skyrocketed partially as a result of how practically everyone can play games because of their smartphone. And with new and established publishers and properties backing these games up, it seems there is a mobile game for everyone. That's what the market is counting on.

Concerns for the Future

Not everything about apps is sunshine, roses, and wine (though you can order at least two things through apps). You may have to deal with the negative consequences of all this app growth, and businesses and developers of all types will also have to consider them. Here are some of the key issues:

What can people do about all of this? Individually, not much, and it will take organized action to make changes at a government or organizational level. You have power over how much you use individual apps or smartphones and what permissions you give those apps. You might want to consider whether the benefits are worth it when you fill your life with more apps and increased smartphone usage.

Apps are beneficial, but looking at them on a larger scale can be a hassle. We hope that you have a better understanding of where apps are headed and that you know what to look for in the future. Remember that unless you are professional, you can take in this information at your own pace and use it as you'd like. We wish you the best with your phone in the future and encourage you to come back to this article as needed and try new things.