You, Your Phone and YouTube: Some Fascinating Watch Time Stats

YouTube, above all other websites, might be the one that takes the most of our time. And we gladly give it. There are videos on practically every topic on the platform, ranging from beautifully shot videos of street food vendors in Korea to monster makeup tutorials. If there is an interest, however niche, there are content creators that cater to it. And that’s fantastic. People can easily find a community online that fits them.

And where do people watch YouTube videos? More often than not people are watching YouTube videos on their phones these days, given how people have places to be and don’t need to sit in front of the TV or computer. And there are videos of every length, whether you have an hour or a minute. And while there are competitors such as TikTok and some streaming services vying for people’s attention, YouTube remains universal and has by far the largest library of content. There is no limit to it, and with your phone, it feels like the whole world is in the palm of your hand.

Here are some statistics and facts that will give you a clearer idea of how YouTube fits into our lives and online environments, especially where it concerns smartphones:

Starting out, let’s get the breakdown of which devices people use to watch YouTube, with data from just last year: 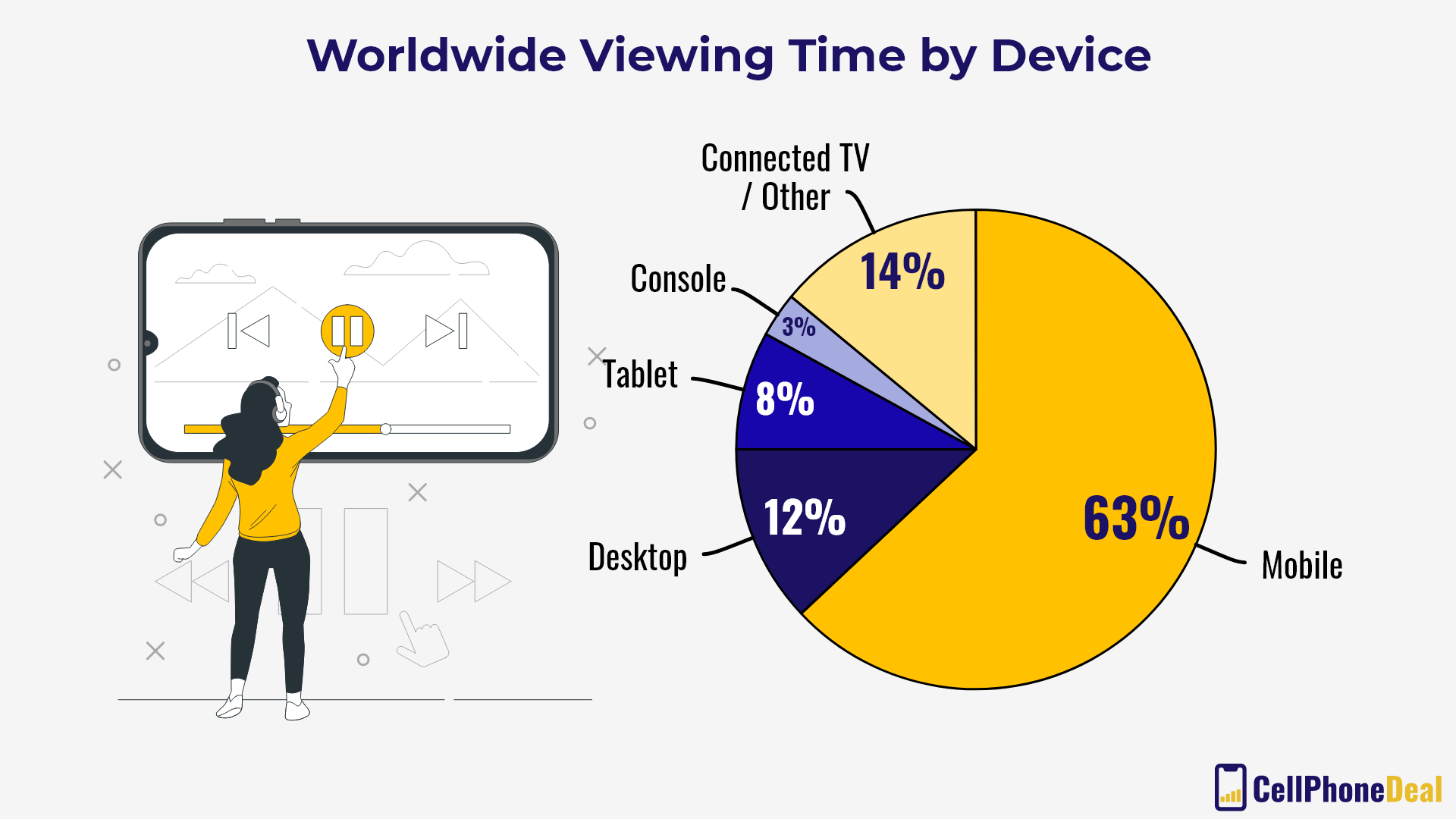 There is so much more you can learn about YouTube in general, and professionals and interested parties should certainly look more into the data, especially as there is always more information coming out.

There are plenty of people watching YouTube and plenty of videos getting watched, but who exactly is doing the watching? Is it a perfect representation of the world population, or are some people statistically more likely to use the platform?

Why keep track of the demographics? Outside of research purposes or pieces for interest just as this, marketing is all about demographics, and YouTube is important to marketing. In fact, advertising and marketing is practically YouTube’s business model (and it's barely profitable as it currently is). YouTube will constantly be seeking to understand its user base. If you work in marketing, so will you. If you do not, then you will want to better understand the forces at work that decide which ads you watch.

One way of looking at it is to look at the most subscribed channels. As of this writing, these are the most popular ones:

Some of these might not come as any surprise to you, but others could be complete strangers. Unless you are inherently interested in the top channels available and check such things regularly, you wouldn’t be expected to know who they are.

Something you should also be heavily aware of is that once people get mostly caught up in one category, they are more likely to be given more recommendations from the same category. For example, if someone is mostly subscribed to beauty or gaming content, they are going to be recommended that thereafter, at least in the short term. There might not be as much natural discovery between different content categories as people would like.

In fact, about 70 percent of what people watch on YouTube is driven by algorithmic recommendations. That makes content creation a matter of gaming the system as much as anything else. When you watch YouTube on mobile next, think about how quickly you just go onto what is recommended next if you have time, instead of searching for something in particular.

Yet after all of the options above and considerations, which are the most popular categories? They are comedy, music, entertainment/pop culture, and “how-to”. We do not expect this to change for some time. 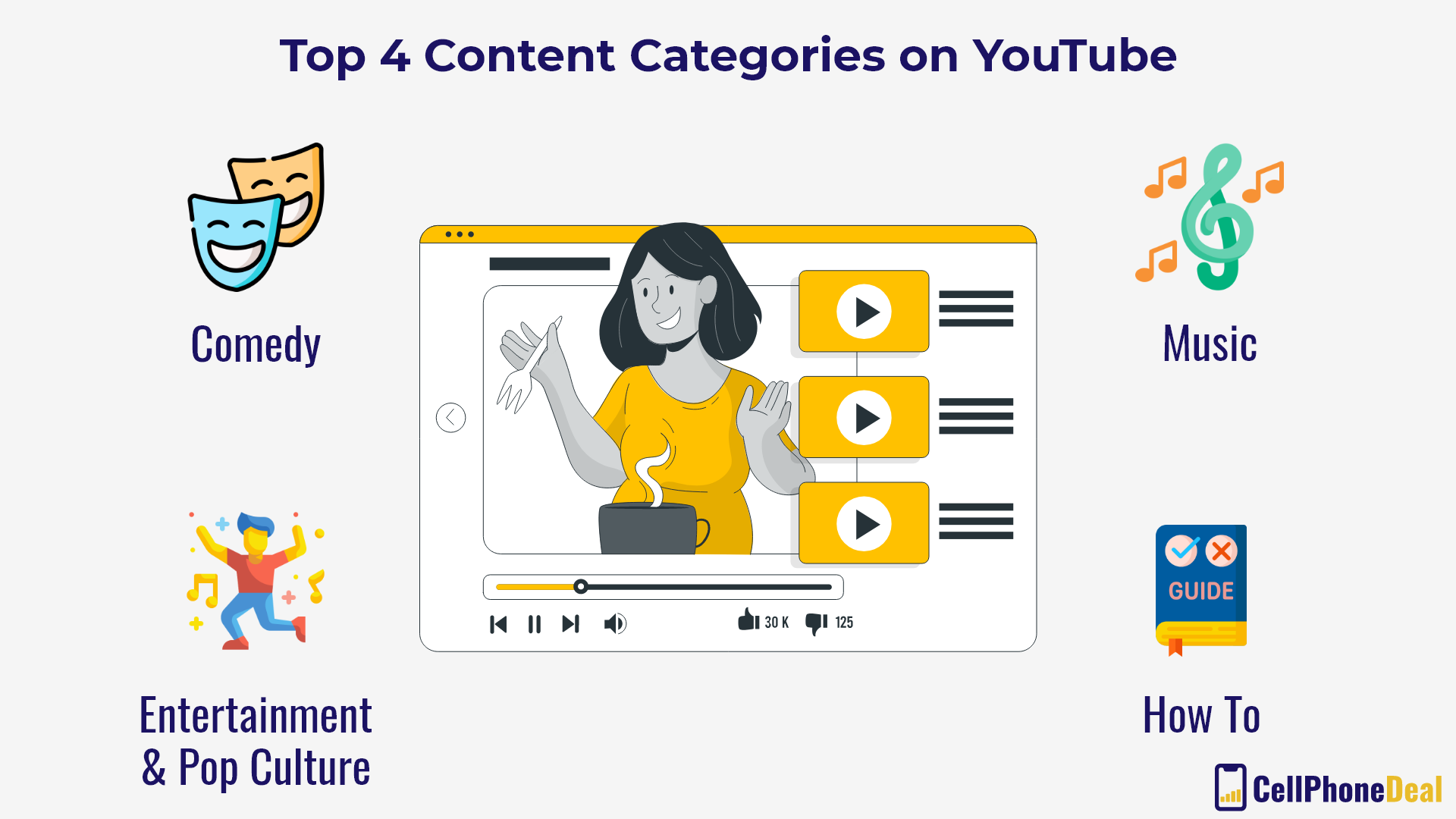 So what about the YouTube app, and how do people use it? Here are some quick stats on the matter:

Was there anything in the last year or so that was worthy of your attention? Any news stories that will be affecting the landscape of YouTube for the foreseeable for you?

What can we expect from YouTube, and what is there available in the pipeline?

How often do you watch YouTube on your smartphone? What do you like to watch, and when? We hope that this article has given you a chance to introspect on your own habits. We hope you continue to enjoy the platform wherever you are, but similarly, we hope that you can enjoy it in exactly the ways you hope to. Similarly, we hope that you are mindful of your viewing and your efforts to expand your horizons. There is more to YouTube than a bunch of videos, and it’s a fascinating topic to study. May you continue your explorations and gain a better understanding of them in the near future.